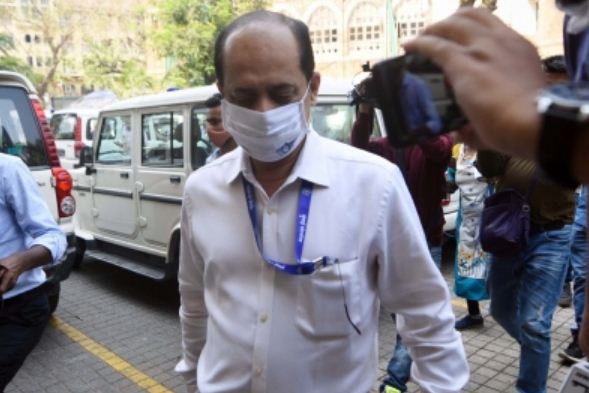 CCTV footage of a Land Cruiser, used by Vaze reveals that Mumbai’s disgraced police officer was using the hotel during the third week of February, before executing the plot to park an explosive-laden SUV near Mukesh Ambani’s house, sources in NIA said.

Vaze’s close aide Vinayak Shinde, a former cop allegedly involved in murder of Mansukh Hiran, owner of the SUV, was also spotted in the hotel.

The hotel was located 10 minutes drive from Vaze’s Crime Branch office. Reacting on Vaze’s underworld dealings, BJP spokesperson Ram Kadam said that this huge extortion racket being operated by the Crime Branch officer from a well known hotel was patronised by the top functionaries of the government.

“From the cricket betting syndicates to collection of ‘hafta’ from bars and restaurants, Vaze operated as a boss of organised criminal gang. My information is that in the name of Covid-19 measures, when the government ordered the bars to shut at 11 pm, the motive was to strike a deal with the select bar operators. Those who paid hafta, were allowed to open their bars beyond midnight,” BJP legislator Ram Kadam told IANS.

“Expensive suites booked by Vaze in such luxury hotels were meant to negotiate deals and organise secret meetings with betting rings and bar operators. Vaze, who led the Crime Intelligence Unit (CIU) of Mumbai police sheltered such crime syndicates instead of acting against them,” Kadam revealed.

A former Inspector of Crime Branch, Mumbai under whom Vaze had worked said that the disgraced cop had investigated several cases of betting and hawala racket under him.

“Of late I came to know that Vaze developed his links with the kingpins of betting syndicates operating from the United Arab Emirates and other middle-east countries. He was hand in glove with them (syndicates),” the inspector said.

NIA officials are meanwhile gathering information on Vaze’s other aides who helped him in procuring gelatin sticks, other gadgets, including sim cards, and helped in organising funds.

Sources said that Vaze was paying a handsome amount to Shinde, his former subordinate who was sentenced for life imprisonment in an police encounter case.

After Shinde came out of jail on parole, Vaze was reportedly using him in collecting extortion related funds. Some other tainted cops, placed under suspension, were in touch with Vaze.

The NIA would be interrogating Vaze till March 25, when his police remand expires.

Sources said that NIA might request the court to further extend remand of Vaze, as he is also named in the murder of Mansukh Hiran.

“The cold blooded murder of Mansukh really nails Vaze. Had he not gone to the extent of eliminating his former aide (Mansukh), he could have gotten rid of the SUV case which was a plot aimed at just scaring a business house. However in a bid to conceal his identity in the SUV case, Vaze got his aide killed and in a way he committed the biggest blunder of life,” said a former police inspector under whom Vaze developed skills of electronic surveillance and busted many organised crime gangs.

No insurance claim if death due to alcohol consumption: SC