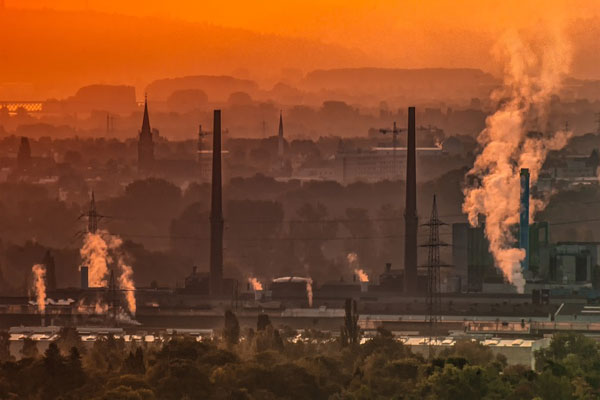 New Delhi: The same clean air policies that can reduce fossil fuel emissions and help reign in climate change can also add up to five years onto people’s lives in the most polluted regions while globally adding more than two years onto lives on average.

Over the last year, Covid-19 lockdowns brought blue skies to the most polluted regions of the globe, while wildfires exacerbated by a drier and hotter climate sent smoke to the normally clean skies of cities thousands of miles away.

The conflicting events offer two visions of the future. The difference between those futures lies in policies to reduce fossil fuels.

New data from the Air Quality Life Index (AQLI) on Wednesday underscored the health threat of a world without policy action.

Unless global particulate air pollution is reduced to meet the World Health Organisation’s (WHO) guideline, the average person is set to lose 2.2 years off their lives. Residents of the most polluted areas of the world could see their lives cut short by five years or more.

Working unseen inside the human body, particulate pollution has a more devastating impact on life expectancy than communicable diseases like tuberculosis and HIV/AIDS, behavioural killers like cigarette smoking, and even war.

“During a truly unprecedented year where some people accustomed to breathing dirty air experienced clean air, and others accustomed to clean air saw their air dirty, it became acutely apparent the important role policy has played and could play in reducing fossil fuels that contribute both to local air pollution and climate change,” says Michael Greenstone, the Milton Friedman Distinguished Service Professor in Economics and creator of the AQLI along with colleagues at the Energy Policy Institute at the University of Chicago (EPIC).

“The AQLI demonstrates the benefits these policies could bring to improve our health and lengthen our lives.”

According to AQLI, the estimated impacts are even greater across northern India, the region that experiences the most extreme levels of air pollution in the world. The residents of this region, which includes the megacities of Delhi and Kolkata, are on track to lose more than nine years of life expectancy if 2019 concentrations persist.

Alarmingly, India’s high levels of air pollution have expanded geographically over time. Compared to a couple of decades ago, particulate pollution is no longer a feature of the Indo-Gangetic plains alone.

Pollution has increased so much in Maharashtra and Madhya Pradesh. For example, the average person in those states is now losing an additional 2.5 to 2.9 years of life expectancy, relative to early 2000.

China is an important model showing that policy can produce sharp reductions in pollution in short order.

Since the country began its “war against pollution” in 2013, China has reduced its particulate pollution by 29 percent, making up three-quarters of the reductions in air pollution across the world.

China’s success demonstrates that progress is possible, even in the world’s most polluted countries. In South Asia, the AQLI data reveal that the average person would live more than five years longer if pollution were reduced to meet the WHO guideline.

The benefits of clean air policies are even greater in the region’s pollution hotspots, like northern India, where 480 million people breathe pollution levels that are 10 times worse than those found anywhere else in the world.

“The bad news is that the greatest impacts of air pollution remain concentrated in South Asia. The good news is that governments in this region are recognizing the severity of the problem and are now beginning to respond,” says Ken Lee, the director of the AQLI.

“The government of India’s National Clean Air Programme (NCAP) is an important step towards cleaner air and longer lives, as is the establishment of the new Commission for Air Quality Management in the NCR.”

Apple Car may introduce LED screen signals for other drivers