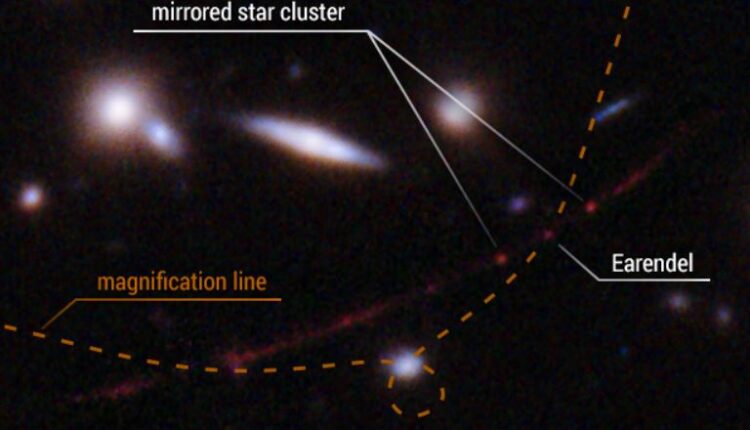 The star named Earendel, which means “morning star” in Old English, is estimated to be at least 50 times the mass of our Sun and millions of times as bright, rivalling the most massive stars known.

It existed within the first billion years after the universe’s birth in the big bang, wrote the scientists in the journal Nature. The find is a huge leap further back in time from the previous single-star record holder, also detected by Hubble in 2018. That star existed when the universe was about 4 billion years old, or 30 per cent of its current age.

Earendel is so far away that its light has taken 12.9 billion years to reach Earth, appearing to us as it did when the universe was only 7 per cent of its current age.

“We almost didn’t believe it at first, it was so much farther than the previous most-distant, highest redshift star,” said astronomer Brian Welch of the Johns Hopkins University in Baltimore, and lead author of the paper describing the discovery.

“Normally at these distances, entire galaxies look like small smudges, with the light from millions of stars blending together,” said Welch. “The galaxy hosting this star has been magnified and distorted by gravitational lensing into a long crescent that we named the Sunrise Arc.”

The discovery holds promise for opening up an uncharted era of very early star formation.

At this point, astronomers are not able to determine if Earendel is a binary star, though most massive stars have at least one smaller companion star.

Earendel’s composition will be of great interest for astronomers, because it formed before the universe was filled with the heavy elements produced by successive generations of massive stars.

If follow-up studies find that Earendel is only made up of primordial hydrogen and helium, it would be the first evidence for the legendary Population III stars, which are hypothesised to be the very first stars born after the big bang. However, the probability is small, Welch added.

Astronomers expect that Earendel will remain highly magnified for years to come. It will be observed by NASA’s James Webb Space Telescope. Webb’s high sensitivity to infrared light is needed to learn more about Earendel, because its light is stretched to longer infrared wavelengths due to the universe’s expansion.

“With Webb we expect to confirm Earendel is indeed a star, as well as measure its brightness and temperature,” said co-author Dan Coe at the Space Telescope Science Institute (STScI) in Baltimore.

“We also expect to find the Sunrise Arc galaxy is lacking in heavy elements that form in subsequent generations of stars. This would suggest Earendel is a rare, massive metal-poor star,” Coe said.

Tips to Keep Your Eyes Safe at Work