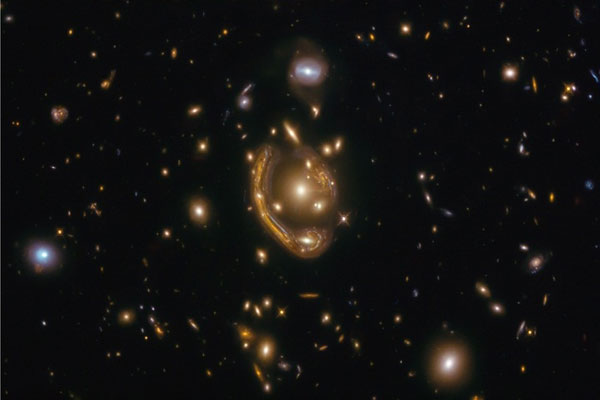 Washington: The Hubble Space Telescope, an international cooperation between NASA and the ESA (European Space Agency), in December 2020 released a photo a striking example of a deep-space optical phenomenon dubbed an “Einstein ring”. The observation sparked new research.

The image showcased a remote galaxy that is greatly magnified and distorted by the effects of gravitationally warped space.

The object, GAL-CLUS-022058s, is located in the southern hemisphere constellation of Fornax (the Furnace). The image was nicknamed the “Molten Ring”, which alludes to its appearance and host constellation.

Further, the object’s unusual partial ring-like appearance can be explained by a phenomenon called gravitational lensing, which causes light shining from a faraway galaxy to be warped by the gravity of an object between its source and the observer. This effect was first theorised by Albert Einstein in 1912, and later worked into his theory of general relativity, the scientists said.

“This Hubble picture exemplifies the fact that the universe is a vast stage for grand illusions. Albert Einstein realised this a century ago as he formulated his law of general relativity,” Hubble said in a statement.

Using the picture, astronomers measured the galaxy’s distance, 9.4 billion light-years, when the universe was less than half its present age, placing the galaxy at the peak epoch of star formation in cosmic evolution.

“This was a time when the universe was going through a ‘baby boom’, forming thousands of stars at a prolific rate. The magnified image of the galaxy gives astronomers a close-up glimpse into the distant past,” Hubble added.

To derive the physical properties of the galaxy, astronomers had to precisely model the effects of the lensing on the galaxy’s image.

“The detection of molecular gas, of which new stars are born, allowed us to calculate the precise redshift and thus gives us confidence that we are truly looking at a very distant galaxy,” said Nikolaus Sulzenauer, PhD student at the Max Plank Institute for Radio Astronomy in Germany, in a statement.

Furthermore, the team determined the galaxy’s magnification factor to be 20, which effectively makes the Hubble Space Telescope’s observing capability equivalent to that of a 48-metre telescope.

This is larger than the currently planned extremely large telescopes.