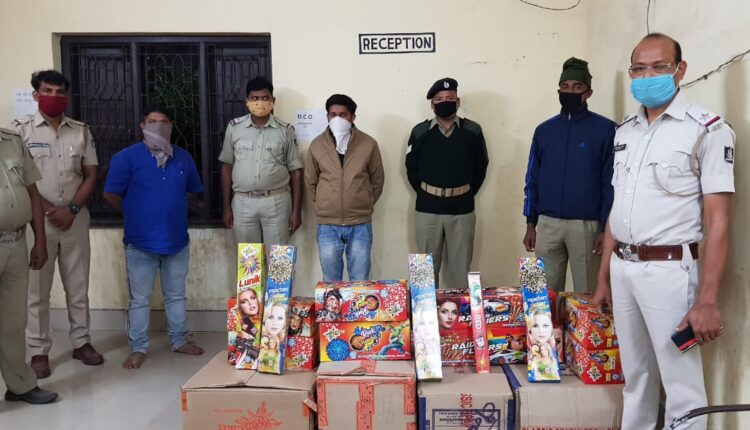 Rajgangpur: Ahead of Diwali, police seized a huge quantity of firecrackers and arrested three persons in this connection in Rajgangpur area of Sundargarh district.

The accused persons have been identified as Rahul Kumar Ram, Amar Kumar Ram and Anand Kashyap — all are residents of Bagichapada under Rajgangpur police limits.

According to reports, based on credible information about possession of firecrackers, a team of Rajgangpur police conducted raids on houses of trio and found firecrackers of different brands including Sunshine, Rock, Ajanta, Maharaja, Cock, Sparkle, Tiger, Dragon, Kitkat, Ground Chakkar and Dragon Flight in huge quantity.

The accused persons had stored the firecrackers inside the houses in unsafe condition without taking any precautionary measure, police said today.

As the trio failed to produce authenticated documents regarding possession of such firecrackers, the police seized all the explosive items and apprehended the accused persons.

Three separate cases have been registered at the Rajgangpur Police Station and the three accused persons have been booked under sections 286 IPC and 9-B(1)(b) of The Explosives Act.

Mental confusion can be early symptom of Covid: Study