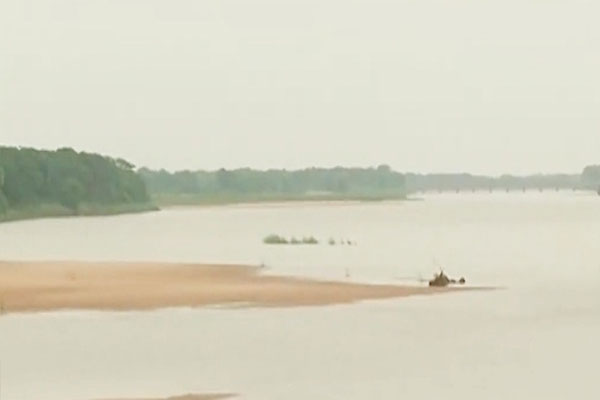 Bhubaneswar: Until the 70s, Bainshi Chandra Behera (65) had lived well off fishing in Bodhapur in Odisha’s Cuttack district. He would ply his trade on Sukapaika, a distributary of Mahanadi, India’s sixth-largest river. As Sukapaika began to die an unnatural death, Behera’s sole source of livelihood also dried up. He now works as a labourer for a Paradip-based fish trader.

Once at the centre of the prosperity and rich cultural heritage of around 10 lakh people living along its 27-km stretch, the river has turned into a curse for its riparian villages, thanks to the imprudent human actions, said Nrusingha Prasad Das (63), a resident of the same village.

The river passes through 425 villages under 26 panchayats in three blocks ï¿½ Cuttack Sadar, Nischintakoili and Raghunathpur — said Dr PC Rath (67), a renowned cardiologist and a native of Bodhapur. He talks about the decline of the fortunes of the people living there as if it were the “death of a civilisation”.

“When a river dies, a civilization dies with it, and these 400 odd villages meet the same fate.”

“The encroachers took the opportunity of the dry river bed where they began their illegal constructions leading to its siltation and complete death in the next couple of decades,” Dr Rath lamented.

A concerned citizen and environmentalist, Rath is at the helm of the Sukapaika Bachao Abhiyan (SBA), the community initiative to revive the river and engages in advocacy with the government and bureaucracy.

Sukapaika originates and terminates within Cuttack district, running from Ayatapur village to Tarapur, said Smita Nayak, who has done extensive research on natural resources of the region, including water. In 1952, the government constructed, as a flood control measure, an embankment at Ayatapur. Five years later, around 290 km upstream of it, the Hirakud dam in Sambalpur district and then, around 25 km upstream of it a barrage at Naraj in Cuttack district came up, said Nayak, who is also the director of a non-profit “Orissa Rural Reconstruction Association (ORRA)” and working for livelihood enhancement of people affected by climate change and manmade disasters.

These structures together were meant to control floods but they considerably reduced the water flowing into Sukapaika. Priya Ranjan Sahu, a senior journalist and an environmental activist based in Odisha said, “According to studies, large dams tend to alter geography and hydrological regimes and they involve issues of control, power and political relations, social justice and equity. While Farakka, Baglihar, Almatti, Narmada are some examples, Hirakud dam is a fresh addition. While it has already altered the local environment and badly impacted the riparian communities, it is also instrumental in killing river Sukapaika around 290 km downstream.”

Fishing and farming livelihoods at risk

“The river is mostly dry. There is no water flowing through it now”, said Ananta Mallick (66), a farmer of riparian Narada Goudagaon village under Praharajpur panchayat in Cuttack Sadar block. What little water there is is the remnants of rainwater, found in shallow, stagnant patches.

Nrusingha Prasad Das (63) is a villager of Bodhapur that was home to 800-odd fishers who have lost their livelihood over the years and most of whom are working as migrant labourers. “The river was rich with a variety of fishes like Rohi and Bhakura,” said Das reminiscing about his childhood when he had once teamed up with his neighbours to catch a huge Vecti fish weighing around 40 kg.

It’s not just the fisherfolk, but thousands of farmers are now unable to sustain agricultural activities, caught between water scarcity, flooding and stagnation, said SBA secretary Roshan Rath, who also hails from Bodhapur.

Water levels in the region have depleted considerably with the drying river. Almost all the ponds, wells and tube wells, which used to draw water throughout the year, go dry by January, said Das, adding that lift irrigation points of more than 50 villages downstream are lying defunct. The tube-wells that used to draw water at 100 feet have to go deeper, to as far as 300 feet to get water.

With the freshwater flow disrupted, salinity in the land and in water bodies is increasing rapidly even though the sea (at Paradip) is around 60 km away, Das said. The water from wells and tube-wells here is unfit for consumption due to excessive iron and arsenic content, he added.

On the other hand, according to Ananta Mallick (66), a farmer of Narada Goudagaon village, in his village and neighbouring Samantarapur village under Kishannagar panchayat, every year more than 1,000 acres of farmland remain submerged for around one and half months during the rainy season as there is no drainage channel. The crops decompose in the stagnant water.

Rivers like Sukapaika, which originate from a river and rejoin the same river, have a natural rhythm that drains out excessive water, said Sahu. Unfortunately, the river that could have evacuated the flood water naturally became the victim of the shortsightedness of the government officials, he lamented.

There is a proven risk in embankments. Sahu warned that if immediate measures are not taken to ensure free-flow of the river, nature might reclaim its drainage route and a Kosi flood-type situation may repeat here. In 2008, embankments on the river Kosi in Nepal gave way, believed to have been weakened by decades of silt deposition. The breach caused the river to change course and it shifted eastward by over 100 km. It flooded large swathes of Bihar and Nepal, displacing more than 3.5 million Indians.

Communities along Sukapaika river come together to reverse manmade disaster