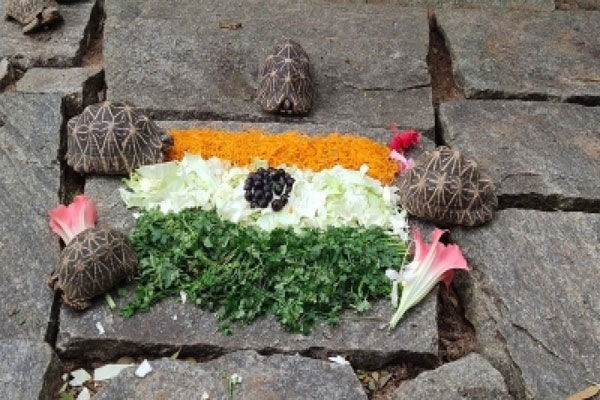 Bengaluru:  To mark India’s Independence Day, animals in the city’s zoo were treated to I-Day theme-based enrichment food, an official said on Sunday.

“We organized a theme-based enrichment using food that is served to animals daily to celebrate the I-Day in the zoo on Saturday,” Bannerghatta Biological Park Executive Director Vanashree Vipin Singh said.

Carrot, cabbage and green leaves were used to display the tricolour in the enclosure along with Bangalore blue grapes for the Ashoka Chakra.

“Enrichment was given to indigenous species such as star tortoise, Indian peafowl and lion-tailed macaque to enhance the ecological value of these species,” said Vanashree, an Indian Forest Service (IFS) officer.

Few tortoises came towards the enrichment to feast on carrots and grapes.

Peafowl had a preference for grapes initially while both male and female lion-tailed macaque enjoyed plucking the food from the enrichment till late afternoon, Vanashree added.

Karnataka State Human Rights Commission Chairman, Justice D.H. Waghela and his wife visited the zoo, its safari and the butterfly park on the occasion.

The Waghela couple released butterflies in the park, which is located in the sprawling zoo on the city’s southern outskirts.

“We also held a spot quiz competition for the visitors to raise awareness on wildlife among the public and five of them won the contest,” said Vanashree.

As many as 1,806 people, including women and children, visited the zoo on the I-Day which was the highest post-lockdown when it was shut for more than 65 days.