‘I still remember the warmth of Jawaharlal Nehru’s hand’

Perched on a small wooden stool in a tiny room in his ancestral house in Kyoto, Mr. Yosiharu Kanazawa, 89, reminisces his memorable handshake with India’s first Prime Minister Pandit Jawaharlal Nehru 64 summers ago. ‘I can never forget the warmth of Nehruji’s hand as he held mine that day. It will stay with me till I am alive’, he says in a hushed, reverential tone.

Private: The spirit of renaissance and its relevance

Dr. Tomio Mizokami, Professor Emeritus at the Graduate School of Foreign Studies in Osaka University and I were visiting Kanazawa san one unusually warm afternoon last October at the request of the Indian Consul General in Osaka Mr. Nikhilesh Giri. Upon hearing about the octogenarian’s abiding love for Hindi, Mr. Giri had visited him a few days before to present him some books by a couple of authors, both past and contemporary. He thought that many of Kanazawa san’s anecdotal accounts about his tryst with India were worthy of documentation. Dr. Mizokami had taught Hindi for many decades at the Osaka University before retiring in 2007. His scholarship on Indian languages, religion and culture is deep and his essays in Hindi and Punjabi are published in prominent Indian newspapers and magazines regularly. He was conferred Padma Shri award by the Indian Government in 2018 in recognition of his contribution in the fields of languages and education. Since Kanazawa san had also studied at the same Osaka University and perhaps around the same time as Mizokami sensei, Mr. Giri felt that it would be proper that the interview was conducted by the latter assisted by me.

Kanazawa san lives in a small, two storied wooden house off the main street in Shimogyo ward of Kyoto – the culturally vibrant city that was once the capital of Japan and is famous for its ubiquitous imperial palaces, Buddhist temples, shinto shrines, manicured gardens and universities. The side of the house facing the main road is made into a shop selling Japanese sweetmeats. This has been the traditional business of the Kanazawa family for the past three centuries. Named ‘Wakasaya Hisahige’, the shop has even received a special commendation from the Governor of Kyoto for preserving the unique Japanese heritage.

Michiko Kanazawa, the daughter, who now looks after the shop, served us tea along with a selection of sweets from the shop. They were in green, saffron and white colours and bore the shapes of Indian flowers, birds and animals.

Mizokami sensei and I sat cross-legged on the tatami floor opposite Kanazawa san, sipping the warm tea from the yunomi cups. Being unsure if the recorder would capture the conversation clearly, I decided to take detailed notes. Kanazawa san had undergone a tongue surgery due to oral cancer a few years ago that had impacted the clarity of his speech. However, there was no sign of pain on his face and he spoke in a husked tone, with long pauses.

I was truly excited about the meeting since I realised Kanazawa san was probably the oldest Hindi linguist in Japan at the moment. Mr. Tomoji Muto (1930-2021) had died only the previous year. He was extremely fluent in Hindi and had served as the Japanese Consul General in Mumbai. He was the official interpreter for then Japanese Prime Minister Nobusuke Kishi during his meeting with Prime Minister Nehru. With Muto san’s passing, I thought the 1935-born Prof. Katsuro Kogo could now be the oldest living Hindi scholar in Japan. His two other contemporaries known to me, namely Prof. Toshio Tanaka and Prof. Tomio Mizokami, are younger than him by 2 and 6 years respectively. We were, therefore, amused to discover that the actual claimant of that rare distinction was our interviewee Kanazawa san, born on 6 December 1932.

Kanazawa san had studied Hindi – or shall we say Hindustani – for four years at the Osaka University in the 1950’s. The university was then known by a different name. He still laments at not being able to pursue further studies in Hindi as he was compelled by his father to lend a hand in running the family business. This was the aftermath of the World War II and Japan was reeling under the attendant economic ruination. There was an acute scarcity of jobs and each household was urging their youth to study only those subjects that would guarantee them quick employment. In such an environment, it had not been easy for Kanzawa san to persuade his parents to allow him to study Hindi but they finally yielded to the son’s profound interest in the Indian language.

‘I had studied a lot of books on India when I was a child and that aroused in me a lot of curiosity about this distant, enchanting land. I had read stories about dyers and washermen, and seen images of cobras dancing to snake charmers’ tunes. I thought that learning Hindi would open up more avenues for me to explore India’, Kanzawa san replies instinctively when asked why he was drawn towards Hindi or Hindustani.

Mr. Eizo Sawa (1896-1978) was the main teacher of Hindi at the Hindustani Department in Osaka University that time. Mr. Santaram Verma was the guest teacher from India. The university was spread over two campuses located in Takatsuki and Uehonmachi. ‘The library regrettably did not have many books and we could access a Hindi thesaurus only in the third year of our language course’, Kanazawa san recalls. ‘The limited resources could easily dampen someone else’s spirit and enthusiasm, but not mine. Rather, it strengthened my resolve to gain command over the language, and in this I was grateful to receive unstinting encouragement from Eizo sensei’, he adds with a sense of nostalgia. He does not conceal his envy then of the language fluency of his friends who were studying Bahasa Indonesia.

The Kansai region those days had a tiny Indian population. So to practise the language, Kanazawa san would make long treks to the Osaka city to meet a Muslim gentleman A. A. Muchla. ‘He was very kind and affectionate, and did not demand a fee for practising Hindi with me. He even entertained me over phone for long hours. This was an exceptional gesture from Muchla sahib towards someone who was not even his compatriot considering phone calls were prohibitively expensive during that period and only the very affluent people in Japan could afford telephones in their houses.’

After two to three years of hard work, Kanazawa san was able to converse in Hindi fluently. Prodded by Mr. Verma, Kanazawa san wrote a letter in simple Hindi that got published in the ‘Sarita’ magazine in 1956. This gave a big boost to his confidence and self-belief. In it, introducing himself as a Japanese young man with a deep interest in Indian language and literature, cinema, photography and philately, he also conveys a desire to be pen-friend with Indian girls. 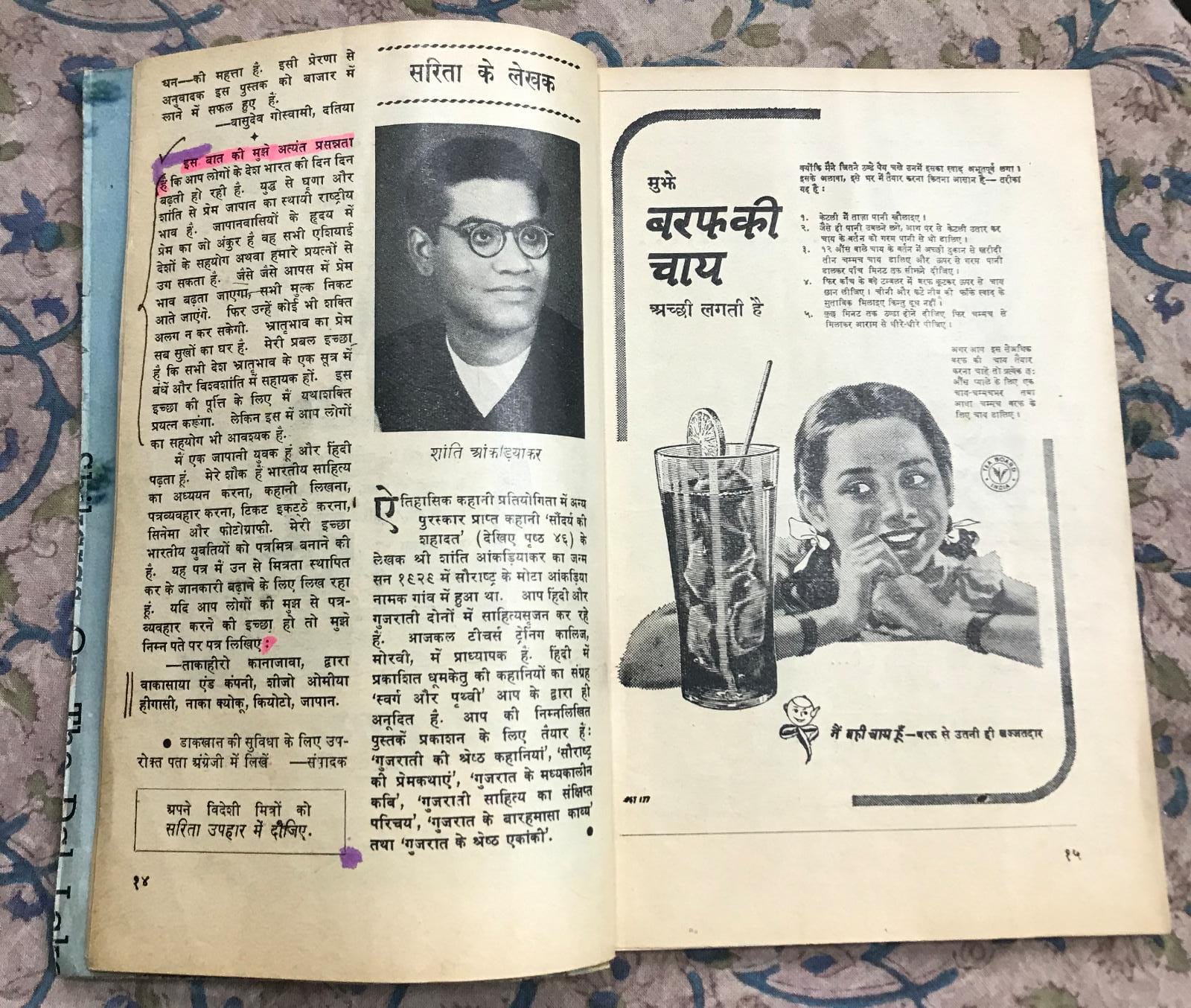 His exhortation did not go in vain. Kanazawa san gleefully produced before us a box full of letters and greeting cards he had received from several Indians by mail over the years, and picked a particular one to read for us. It was from a girl from Jaipur who treated Kanazawa san as her foster brother and sent ‘rakhees‘ every year. She had sent a black & white photograph of her with her family with one of the letters. Kanazawa san says he still felt remorseful at not being able to reply to all of them. Despite visiting India three times, he never met his foster sister in person. Their correspondence steadily came to a halt. It happened in the 1960’s. Kanazawa san was in his 30’s at that time. He did not reveal the girl’s name or address, and we did not press him. Not disclosing personal information is a common etiquette in Japan and we understood it well.

He was, however, visibly exuberant while talking about his sojourns in India. He recalls the sense of exhilaration he had when he set foot on Indian soil for the first time. He found the life there chaotic but bereft of selfishness and hypocrisy. Besides Agra, he had visited Delhi, Varanasi, Gaya, Jaipur and Khajuraho. He was mesmerised by the beauty and magnificence of Taj Mahal and would visit it each time he went to India. People were amused to see a foreigner speaking their tongue and would accost him with fondness. ‘I relished tandoori chicken a lot, but unfortunately my tongue cannot handle its spiciness now’, he chuckles.

He mentions about Nehruji’s visit to Kyoto towards the end of our two-hour long conversation. It was 1957. The Prime Minister did not have any security detail and anybody could meet him without an appointment. ‘I went to see him at the hotel where he was staying, and told him ‘Mujhe Bharat bahut pasand hai (I love India a lot)’. He smiled as he shook my hand and gave me his autograph. I still remember the warmth of his hand’. There is a tinge of emotion in Kanazawa san’s voice. Indiraji had also accompanied her father but she was not present during the meeting. So he waited patiently at the hotel to see her. Indiraji used to send her greeting cards during New Year. He showed us some of them bearing photographs of Rani Lakshmi Bai. He has printed the image of that greeting card on a tee-shirt that he often wears with great pride. It was because of his love for India that he encouraged his daughter to avail a scholarship by the Indian Council for Cultural Relations (ICCR) to learn Bharatanatyam in Tamil Nadu. Michiko san knows some Tamil and gives occasional stage performances.

Both Kanazawa san and Michiko san came to see us off as we hailed a taxi for the Kyoto railway station. Thanking us for the visit, he said, ‘Hindi opened a new, beautiful world to me and, therefore, I still remember the language after all these years. I cannot read and hear very well now because of old age, but I still follow the happenings in India and the relations between our two countries from newspapers through my daughter.’

We promised to keep in touch, and bid him adieu, wishing him good health and long life.

*The writer currently teaches Hindi at the Graduate School of Foreign Studies, Osaka University where he is an Assistant Professor. The original article is in Hindi and its English translation has been done by Dr. Adarsh Sharma, a long-term resident of Nara, and Nikhilesh Giri.

Success and failure of UN, and its system