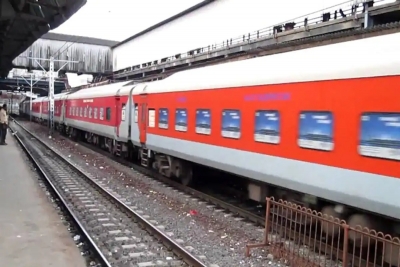 New Delhi: A man, working as sergeant at the Indian Air Force (IAF), has made a hoax bomb call to the police control room (PCR) to “stop” the Mumbai-bound Rajdhani Express as he was getting late to catch the train, the police said on Saturday.

A senior police officer said that a call was received at around 4.48 p.m. The caller said that there was a bomb on the New Delhi-Mumbai Rajdhani Express scheduled to depart for Mumbai from the New Delhi Railway Station.

“The Railway officials were also informed about the scheduled departure of the train. A police team later went to platform number 3 where the train was stationed. Bomb Disposal Squads were also requisitioned. The Railway Protection Force also joined in the operation,” said the official.

The official said that the number of the caller who made the call to the PCR was also not reachable. The cell phone number was found registered in the name Anand Kumar, a resident of Chhapar village, Bhiwani (Haryana).

“We found an alternate number on the same address and he was contacted. One Anand responded to the phone call, and said that the owner of the mobile number Sunil Sangwan was his younger brother, a Sergeant in IAF. Sangwan was scheduled to board the above train from New Delhi Railway Station but got late. And this was the reason he called the PCR,” the official said.

The police learnt that Sangwan was also a habitual drunkard. Anand was asked to provide the photograph of Sangwan.

“The photo was circulated amongst the police and RPF staff to trace him. The booking chart was scanned to find out the passengers having booking with the name of Sunil. Based on the above inputs Sangwan was finally traced,” said the official.

Identity of Sangwan was established through his Air Force ID Card.

The phone which he used to make the PCR call was recovered.

He disclosed that he was getting late for the train as he had to go to his place of posting at Air Force Station, Santacruz, Mumbai. He was then detained.

“Legal action as per law being taken against him,” said the official.

No night flights at Lucknow Airport for 4 months from Feb 23; Here’s why

Judge accidently shoots himself in UP court while wearing gown