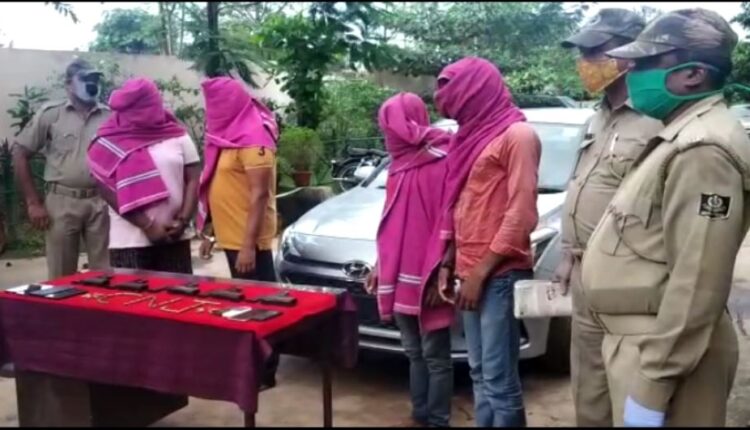 Cuttack: In a major breakthrough against illegal arms trade, the Commissionerate Police seized five country-made pistols and a large number of live ammunitions in Cuttack city. Four persons with criminal records were also arrested in connection with the matter.

Acting on a reliable information, the police searched a Hyundai car coming from Jagatsinghpur side to Cuttack city on Tuesday evening. When five 9mm country-made pistols and 50 numbers of 9mm live ammunitions were recovered from the car, the police apprehended the four occupants of the vehicle. Also, the police seized the car and seven mobile phones from the possession of the four persons.

During questioning, the four accepted that they used to procure illegal fire arms from Munger district of Bihar from different gunrunners and involved in illegal arms trade and used to supply arms and ammunitions clandestinely to criminals in Puri, Khordha, Cuttack, Jagatsinghpur, Kendrapara, Nayagarh, Jajpur and Dhenkanal districts.

A cop said the four are history-sheeters and several criminal cases are pending against them at different police stations. A case under Arms Act has been registered at Chauliaganj Police station.