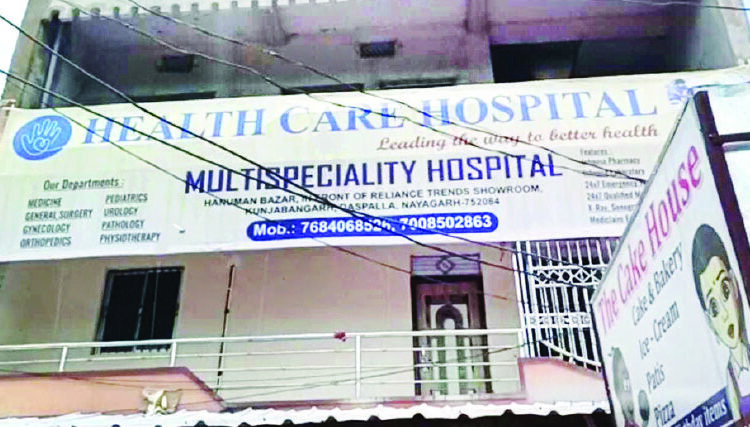 Nayagarh/Daspalla: In the absence of routine raids and monitoring by administration, a number of illegal hospitals have mushroomed in Daspalla locality of Nayagarh district.

A source said that one such private hospital named ‘Healthcare Multispecialty Hospital’ was inaugurated on July 29 at Hanuman Bazaar under Daspalla block. The health facility has been providing healthcare services like delivery, minor operations, ultrasonography and x-ray for the last four days.

A number of male and female patients have been provided treatment, in the meanwhile.

Interestingly, the hospital has not yet obtained any registration certificate under Clinical Establishments (Registration and Regulation) Act, 2010 of the government but already started functioning, which has raised the eyebrows of many local denizens and intelligentsia.

Sambad team learnt about the illegal treatment of patients being carried out in the private hospital. Following probe conducted by the leading Odia daily and on being tipped-off about it, the health facility authorities vacated its premises by asking the previously admitted patients to leave.

An expectant mother from Sakeni village of Daspalla locality in Nayagarh was previously admitted and caesarean operation was conducted on her for delivery of baby. Later, the indoor patient left by Monday evening, an attendant of the patient informed on promise of anonymity.

Doctors treating the woman patient told her husband that there are certain complications and she will be attended at her home for further treatment and consultation.

When contacted, Additional Chief District Medical Officer (Health & Family Welfare) and district Nodal Officer of Clinical Establishments (Registration and Regulation) Act, 2010 and Pre-Conception and Pre-Natal Diagnostic Techniques (PCPNDT) Act, 1994 Dr Subash Nayak said, “No such private health facility has been registered in the name of Healthcare Multispecialty Hospital in Nayagarh district. We will take appropriate action in his regard.”

Notably, despite several attempts, views of the hospital owner could not be obtained.

Manager of the private hospital Saumyat Behera said, “We have applied for registration under Clinical Establishments (Registration and Regulation) Act, 2010. The health facility was recently inaugurated. However, I have no information about patients being treated in the hospital.”

“But, what is wrong in it, if healthcare services are being provided?” Behera questioned.