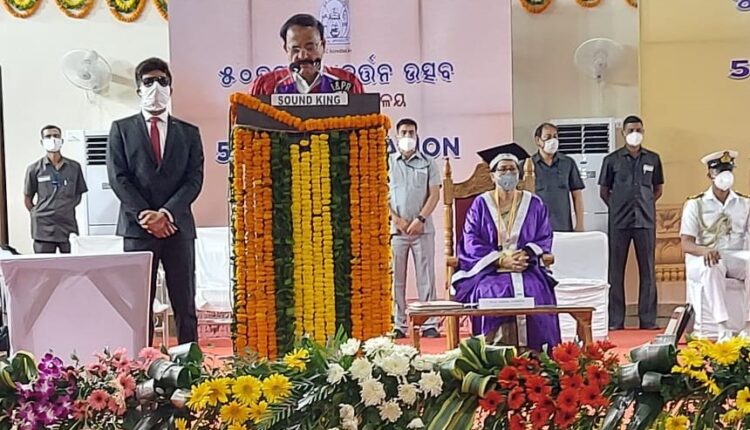 Bhubaneswar: Vice President M. Venkaiah Naidu today called upon students to take inspiration from India’s glorious past and imbibe the spirit of entrepreneurship and innovation.

Addressing at the 50th Convocation of Utkal University in Bhubaneswar, he reminded the students and faculty members of India’s glorious tradition of international education.

Citing the examples of ancient Indian institutions such as Takshashila, Nalanda, Vallabhi and Vikramashila, he emphasised the need to bring back this great Indian tradition to create well-rounded and innovative individuals who can transform the country both socially and economically.

The Vice President asked the universities and educational institutions to equip the students with 21st century skills so that they can emerge as job creators.

“The aim of education is not only cognitive development, but also building character and creating holistic and well-rounded individuals equipped with the key 21st century skills”, he underscored.

Mentioning that Odisha is home to 62 different tribal communities who constitute 23% of the state’s total population, Naidu called for according priority to their development and welfare.

Stressing on the approach towards the tribals, he said that paternalistic attitude towards tribals is wrong.

“Truth is that we have a lot to learn from the tribal communities who live a simple life in harmony with nature”, he added.

In this regard, the Vice President also cited a study by the Scheduled Castes and Scheduled Tribes Research and Training Institute (SCSTRTI) that revealed that the tribal population in Odisha was largely untouched by the COVID-19 pandemic mainly because of the unique customary practices and traditions of tribes such as walking in rows (instead of groups) and eating (immunity boosting) natural food.

He suggested that such positive aspects of tribal communities should be highlighted and included in the school curriculum. He also wanted the institutions like Utkal University to take up research on issues faced by tribals and actively contribute to policy formation for their development and well-being.

Drawing attention to the regular occurrence of natural disasters like cyclones, floods and droughts in the State, Shri Naidu called for making disaster management an integral part of the education from early days. This would prepare us better to face any such calamity in future, he opined.

Talking about the rich culture and history of Odisha, the Vice President said that the great land of Kalinga taught the lesson of peace to Emperor Ashoka and the kings who ruled over this land were instrumental in building cross-cultural links with South East Asia. Noting the glorious maritime traditions of Kalinga, he lauded the daring sea-faring merchants of Kalinga who established trade links with various countries including Srilanka, Java, Sumatra, Bali and Burma. Praising the skills and entrepreneurship of Kalinga’s boatmen and traders, the Vice President wanted the younger generation to take inspiration from them and strive to build a happy and prosperous India.

In his address, Shri Naidu also mentioned about Odisha’s Bhaumakara dynasty that had a long succession of women rulers in 9th -10th century. Calling it shining example of women empowerment, he urged upon the younger generation to read about such stories and pledge to fight against gender discrimination as well as other social evils like casteism, communalism and corruption.

Calling the students as the next generation of leaders, lawyers, academicians and administrators, the Vice President told them that their future is intertwined with the future of this country and advised them to be disciplined, honest and hard working to succeed in any field. He also asked the students to be sensitive to the needs of the excluded. Terming the youth as the key for change, he wanted them to fight hunger, disease, ignorance and every other evil that retard Nation’s growth.

Stating that the day of convocation marks an important day in a student’s life, the Vice President asked them to nurture their personal competencies such as— passion, perseverance, tenacity and an open mind to learn— for a successful and fulfilling life ahead. He congratulated the passing out students and wanted them to “become creators of the future”.

Describing Utkal University as the educational lodestone of Odisha, the Vice President appreciated it for maintaining high educational standards.