Sambalpur: Obtaining an admit card fraudulently to appear in annual matriculation examination conducted by Board of Secondary Education (BSE) for her boyfriend proved costly for a young girl as she was caught red-handed during examination.

The incident was reported from Dhanupali area in Sambalpur district of Odisha.

Odisha Matric Exam Results to be out in July first week

The preliminary investigation suggested that the young girl from Tilia village under Rengali police limits was appearing in the matric examination for her beau.

The duo was booked under sections 419, 420, 468 and 471 of IPC R/W section 9 of the Orissa Conduct of Examination Act-1988. During investigation, both the accused persons have been arrested. 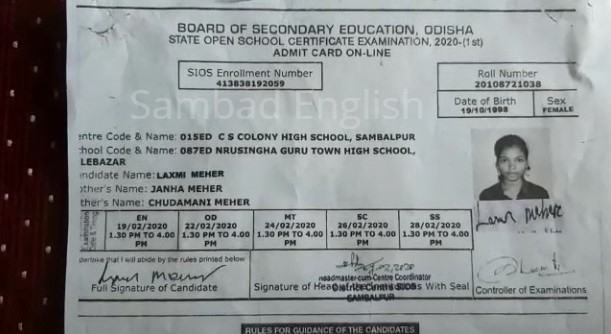 According to reports, the candidate Laxman Meher of Mahulmunda village under Sambalpur Town Police Station pursuing education through State Institute of Open School was allotted the examination centre at Commissioner Colony High School under Dhanupali police limits. However, his girlfriend namely Kamala Seth obtained a forged admit card in name of Laxmi Meher and went to the exam centre for the annual board test.

During verification of admit card before commencement of examination, the girl identified herself as Laxmi Meher as mentioned in the document. When the examiners raised suspicion over the candidate, she evaded their question saying ‘error’ in the original admit card, which was issued in name of Laxman Meher.

Subsequently, her claim was proved false during scrutiny as the detailed information mentioned in the original admit card available with the BSE authorities was mismatched with the girl’s admit card.

When the fact came to fore the examination invigilator left the candidate’s the exam sheet unsigned and informed the examination centre superintendent in this regard following which a written complaint was lodged with Dhanupali police.

Acting promptly, the police registered a case and arrested Laxman Meher, the candidate and the fake candidate Kamala. During interrogation, the girl confessed to the malpractice she attempted to help her beau clear the exam.

The accused Kamala Seth forged the original admit card by editing her name and photograph of actual candidate. She was caught by invigilator of the examination centre, the police said in a release.