In Pics: Indian Men’s and Women’s Hockey teams get grand welcome in Odisha 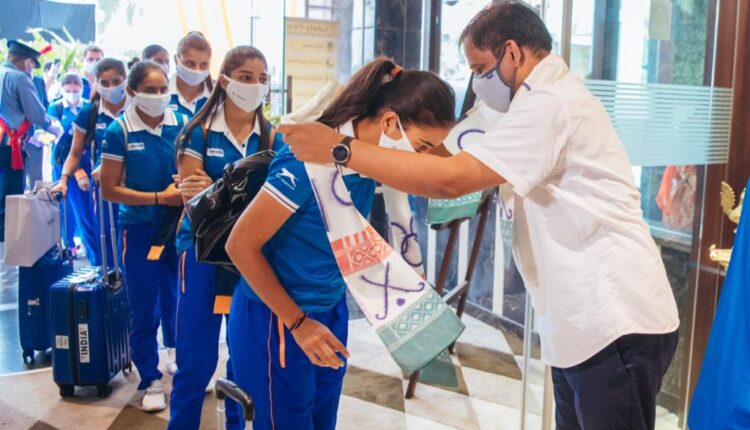 Bhubaneswar: The Indian Men’s Hockey team and Women’s Hockey team were given warm welcome upon their arrival at the Biju Patnaik International Airport, Bhubaneswar today afternoon. Sports Minister Tusharkanti Behera and senior government officials welcomed the players at the airport.

In two separate luxurious buses the men’s and women’s teams were then taken to a city hotel amid tight security. Supporters and fans lined up along the road to get a glimpse of their favourite hockey players.

Blowing of Conch and beating of drums at the hotel and dance of ‘Paika akhada’ upbeat the environment in which the men’s and women’s teams were received at the hotel.

Special dishes prepared by the city hotel were served to the players at the hotel during the lunch.

In separate photo-ops, the Chief Minister along with the both the teams were clicked.

This is the first time the Indian men’s and women’s hockey teams are visiting Odisha State, the official sponsor of the teams, following their return from Tokyo Olympics 2020.

While the Indian men’s hockey team won bronze medal at the Olympic Games, the women’s team gave a tough fight to England in a match for bronze medal at Tokyo, but remained unsuccessful.