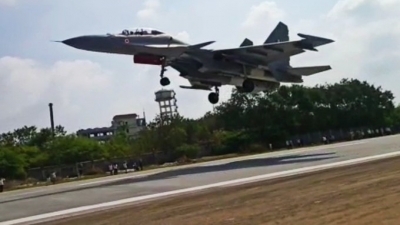 Amaravati: In a successful emergency trial, fighter aircrafts of the Indian Air Force (IAF) touched down the emergency landing facility set up on Chennai-Kolkata National Highway in Bapatla district of Andhra Pradesh on Thursday.

Four aircrafts including two types of fighter aircrafts almost landed within a span of 45 minutes on the runway at the National Highway 16 at Pichukalagudipadu village in Korisapadu mandal.

Flying at a height of 100 meters from the ground, the aircrafts touched the runway and took off without completely landing.

An official said Sukhoi 30, two Tejas LCA and a transport aircraft AN32 were used for the trials run.

Bapatla district administration made elaborate security arrangements for the first of its kind exercise in Andhra Pradesh.

Bapatla Superintendent of Police Vakul Jindal along with Indian Air Force Group Captain R.S. Chowdary supervised the arrangements. The IAF has set up emergency base camps near the landing strip for the trial run.

The officials had set up radars and other technical equipment to conduct the exercise successfully. IAF officials expressed satisfaction over the success of the trial run.

About 200 policemen were deployed as part of the security arrangements while heavy vehicles on both sides of the highway were halted for the trial runs. The traffic was diverted at different points on both sides.

A large number of people from nearby villages had gathered to watch the aircrafts landing on the highway.

A 4.1 km long and 60 metre wide Emergency Landing runway (ELR) has been built on the highway to enable fighter aircraft to land safely in times of emergency. Officials said a similar facility will be developed on the highway in Prakasam district.

According to officials, the facility will be useful in times of war and other national emergencies. Developed like a runway, the strip can be readied within half-an-hour.

In case of emergency, the highway will be blocked for vehicular traffic and put to use exclusively for the landing of aircraft. The airstrips can be used for strategic purposes as well as during natural calamities for rescue and relief operations.

Constructed at a cost of Rs 86 crore, this is the first ELR in South India and third in India after Uttar Pradesh and Rajasthan.

It was in 2018 that the Centre had decided to develop 19 airstrips on the national highways in different states to operate aircraft when road or rail routes get disrupted during emergencies.

The first airstrip was inaugurated at Purvanchal Expressway in Uttar Pradesh in November last year.