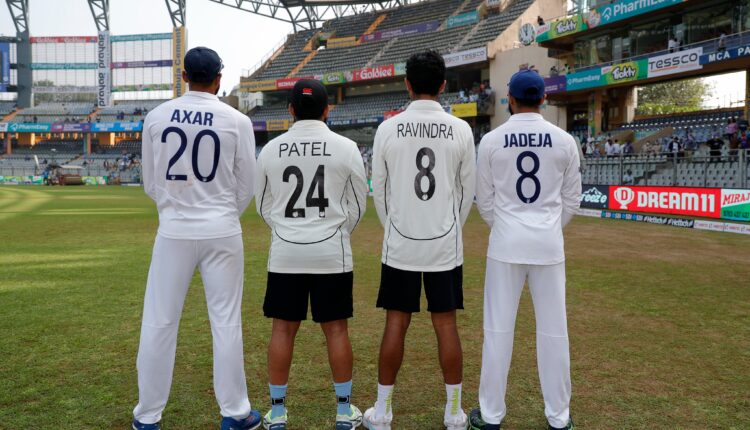 The quartet, which shares similar names, posed from left to right with their backs to the camera to read ‘Axar Patel Ravindra Jadeja’.

How's that for a quartet! 🇮🇳 🇳🇿#INDvNZ #TeamIndia @Paytm pic.twitter.com/eKqDIIlx7m

India thrashed New Zealand by 372 runs in the second Test at the Wankhede Stadium here to record their biggest victory by run margin and win the two-Test series 1-0. With this win, India also bagged 12 points in the World Test Championship 2021/23 standings.

The Indian spinners had reduced New Zealand to 140/5 in their second innings at stumps on the third day and they wrapped up victory in 43 minutres on the fourth morning, bundling out New Zealand for 167 runs in 56.3 overs to record a smashing win.

This is India’s biggest win by run margin, bettering the 337-run victory registered against South Africa at the Ferozeshah Kotla in New Delhi in December 2015. This was also the seventh time that India have won a Test match by 300 or more runs.

Mayank Agarwal, who scored a fantastic 150 in the first innings and followed it up with 62 in the second, was adjudged the ‘Player of the Match’ while Ravichandran Ashwin was declared the ‘Player of the Series’ for his vital contribution of 70 runs and 14 wickets in the two-match series.

International Civil Aviation Day 2021: Know theme and why it is celebrated on Dec 7