In the steps of the Olive Ridley, here’s some interesting facts 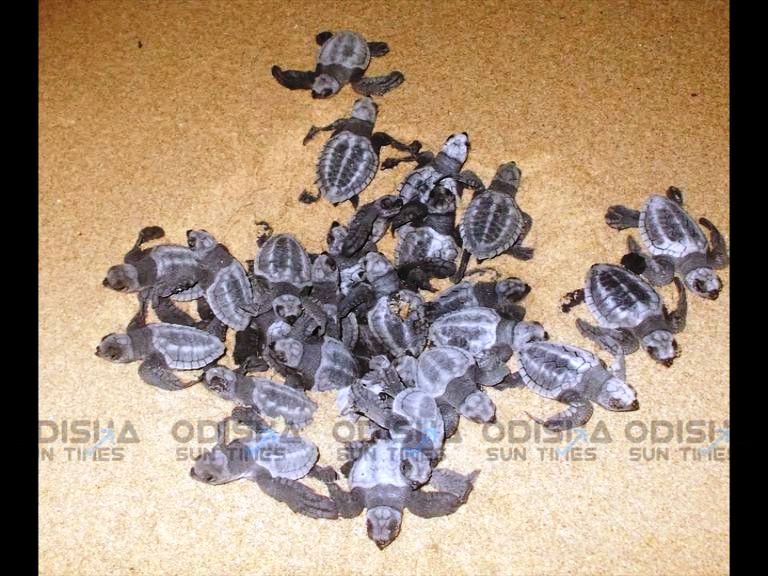 Mating happens in the sea itself and the males usually go back to their feeding grounds while the females linger around for almost a month till they are ready to lay their eggs. They then scale the sand slopes to lay eggs in January and February.

Odisha coast has the world’s largest known rookery of Olive Ridley sea turtle. Besides Gahirmatha rookery, two other mass nesting beaches are on the mouth of Rushikulya and Devi rivers. Scientific findings have revealed that 50% of the world population of the turtles is endemic to Odisha and 90% of them along the Indian coastline comes to the Odisha coast for nesting.

While the state Forest Department is making all efforts to protect these endangered turtles, several NOGs are also working in non-protected areas to ensure safe return of the hatchlings to the waters.

Odisha Sun Times caught up with Bijaya Kumar Kabi of Action for Protection of Wild Animals (APOWA), which is engaged in protection of Olive Ridley turtles through community participation on Siali beach in Odisha’s Jagatsinghpur district, to understand their behaviourial pattern. Here’s some interesting facts about the reptile that got the name for the greenish colour of its skin and heart-shaped shell.

Predator Swamping
Olive Ridley sea turtle is famous for arribada, a Spanish word for ‘arrival’. It is commonly used to explain its mass nesting behaviour. When the hatchlings emerge, practising the same ‘predator swamping’ behaviour, they rush to the sea in large numbers overwhelming the predators waiting to eat them on the beach.

Survival Of The Fittest
On an average, a female turtle lays 80 to 120 eggs in its conical nest of about one and a half feet deep laboriously dug with its hind flippers. The eggs deep in the soil are the strongest and their chances for survival are more than those at the top. It is estimated that approximately 1 of 1000 hatchlings that enter the sea waters survives to reach adulthood.

Only If The Setting Is Ideal
The females lay their eggs in solitary sandy nests on the beaches and go back to the sea, swimming away to their feeding grounds. However, if the environment is not conducive due to erosion and pollution, the turtles return to the sea without laying the eggs even after digging up the nest.

Outsmarting The Predators
To cheat predators, a female turtle more often than not digs up a false nest about 4 to 5 ft away from the one it has laid the eggs in.  When a dog, rummaging through a false nest, finds nothing, it skips the one with eggs.

Mad Dash To The Sea
The young ones hatch after 45 days and make a beeline for the sea waters in large numbers, trying to avoid being caught by predators like dogs and raptors.

Finding Their Way Back
The hatchlings that ‘sprout out’ of eggs in hatcheries are left on the beach to crawl their way into the sea as the contact acts like a magnet which later helps them swim back to the same coast as adults for nesting.

The APOWA, established in 1999, partners with local communities in the state to help protect and conserve plants and animals in coastal Odisha. During the nesting season (December to May), night patrolling is undertaken to monitor and help protect nesting/hatching activity through volunteers and appointment of turtle guards from local community. Besides protecting the females from predators and human poachers, they respond to disoriented turtles, rescue hatchlings and also remove litter and plastic from beach area, among others.

“Through sand art, we try to create awareness about the need to protect the marine guests during the nesting and hatching seasons. Mock drills are conducted ahead of the nesting season to prepare the volunteers to meet any eventuality. Community based conservation is the only way save these creatures,” said Kabi.

In 2016, as many as 320 mass nesting sites were spotted on Siali beach. The APOWA volunteers shifted several eggs to nearby hatcheries to ensure their safety, he added.

Tag only for Banglar Rasogolla, not for the sweet in general: GI Registry

Save bees to save the planet Earth; here’s why

Exposure to air pollution may cause heart attack within an…