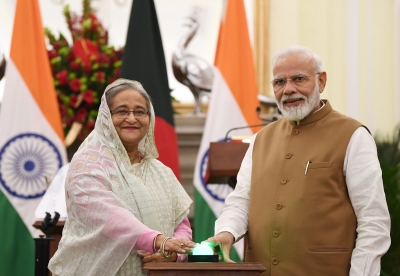 During the talks, the Bangladesh PM voiced concerns over Assam’s National Register of Citizens (NRC) and raised the Teesta water and the Rohingya refugee issues.

In a 53-point joint statement, the two sides hailed the bilateral ties. The agreements, included pact for a joint coastal surveillance system.

On NRC, the Indian side conveyed to Sheikh Hasina that publication of the list was a court-monitored process and the final scenario was yet to emerge.

On Teesta, Sheikh Hasina said the people of Bangladesh were awaiting early signing and implementation of an interim agreement on sharing of waters, which was agreed upon in 2011. Modi conveyed that his government was working for conclusion of the agreement as soon as possible, the joint statement said.

While insisting on broad-based bilateral ties, the two leaders emphasised on initiatives for development of closer maritime security partnership, and noted the progress made in the finalisation of an MoU for establishment of a coastal surveillance radar system in Bangladesh.

Both sides agreed to expedite commissioning of a joint study on prospects of signing a bilateral comprehensive economic partnership agreement (CEPA).

Modi appreciated the zero-tolerance policy of Bangladesh against terrorism and commended Sheikh Hasina for her resolute efforts to ensure peace, security and stability in the region.

“Recognising that terrorism remains one of the most significant threats to peace and stability of both the countries and the region, the two Prime Ministers reiterated their strong commitment to eliminate terrorism in all its forms and manifestations, and stressed that there can be no justification whatsoever for any act of terror,” the joint statement said.

They also recognised the need for increased cooperation in defence for an integrated and secure neighbourhood, taking into account the joint operation carried out by both forces during the Bangladesh Liberation War of December 1971.

Modi and Sheikh Hasina also agreed to expedite work towards drawing upon a $500 million defence line of credit, extended by India to Bangladesh. The implementation arrangements for this was finalised in April.

They also signed an MoU on withdrawal of 1.82 cusec of water from the Feni river by India for the drinking water scheme for Sabroom town in Tripura.

The two leaders agreed that the loss of civilian lives at the border was a matter of concern and asked border forces to enhance coordinated measures to bring such border incidents down to zero.

In addition, India has completed a project to build 250 houses in Rakhine state of Myanmar and is now preparing to implement another set of socio-economic development projects in the area.

Hasina conveyed the gratitude of her government for humanitarian assistance provided by India since September 2017 to help meet the needs of displaced persons from Myanmar. They agreed on the need to expedite safe, speedy and sustainable repatriation of the Rohingya to Rakhine State, the statement said.

She invited Modi to visit Bangladesh, which was accepted. It was agreed that dates of would be finalised through diplomatic channel.