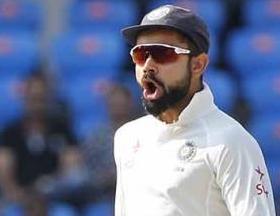 Spinners Ravindra Jadeja and Ravichandran Ashwin picked up four wickets apiece as India bowled Bangladesh out for 250 in their second innings to clinch the one-off cricket Test by 208 runs here on Monday.

Resuming the day at 103-3, Bangladesh lost two wickets in the first session to be at 202-5. Then till the tea session, they lost the rest of the five wickets, struggling against Jadeja, Ashwin and pacer Ishant Sharma, who bagged two wickets.

Overnight batsman Mahmudullah (64) waged a lone battle as he posted his 13th fifty in Test cricket, while rest of the batsmen failed against the pressure exerted by India at the Rajiv Gandhi International Stadium.

The pressure told on the visitors from the morning. Experienced left-handed batsman Shakib Al Hasan could add only two runs to his overnight score of 21. A delivery from left-arm spinner Jadeja bounced high, hitting the rough to kiss Shakib’s gloves for an easy catch by Cheteshwar Pujara at short leg in the second over of the day.

At 106-4, captain Mushfiqur Rahim joined Mahmudullah in the middle and the pair negotiated the pressure exerted by India for a while. Mahmudullah began with two edgy fours off paceman Umesh Yadav and once he got settled, Jadeja and off-spinner Ashwin failed to trouble him.

Ashwin, however, ended the 56-run partnership as an attacking Mushfiqur danced down the track but couldn’t clear Jadeja, who took a running catch at mid-off.

Then Mahmudullah partnered Sabbir Rahman (22) as they showed the doggedness and willing to battle it out with a 40-run stand for the sixth wicket till the lunch session which ended with Bangladesh at 202-5.

Early into the second session, the visitors lost Sabbir and Mahmudullah and afterwards, it was a formality for the Indians.

Sabbir was plumb in front of the wickets against a fast delivery from Ishant. Mahmudullah mistimed a pull shot off Ishant and the ball ballooned to Bhuvneshwar Kumar, as the tourists were reduced to 225-7, still 234 runs behind.

Then Mehedi Hasan Miraz (23) got an edge off a Jadeja’s spinning delivery which ended up at the hands of wicket-keeper Wriddhiman Saha.

Jadeja then removed Tajiul Islam (6) as the left-hander miscued a cross-batted stroke only to be caught by close-in fielder Lokesh Rahul.

Ashwin completed the rout by dismissing 11th batsman Taskin Ahmed (1) with a leg before decision following a review by the Indians.

It was a comprehensive show by Virat Kohli-led side. They put up a mammoth total of 687-6 declared in their innings before bowling out Bangladesh for 388. Then, India scored at a rapid pace in their second innings before declaring at 159-4, setting a target of 459 for the visitors.

Captain Kohli, who scored 204 and 38 in the two innings respectively was declared man–of-the-match.

Following the win, Kohli’s side has now captured four consecutive Test series. They won away against the West Indies before prevailing over New Zealand and England. (IANS)