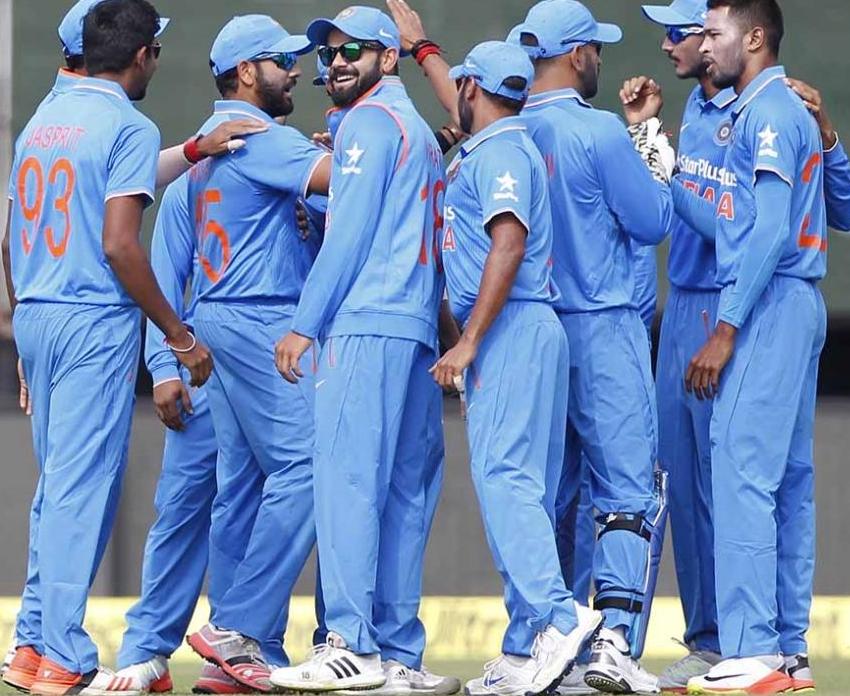 India rode on a disciplined bowling performance and an unbeaten half-century from Virat Kohli to defeat New Zealand by six wickets in the first One-Day International (ODI) at the Himachal Pradesh Cricket Association (HPCA) Stadium here on Sunday.

Chasing a target of 191 runs, the Indians crossed the line in 33.1 overs, losing four wickets along the way.

Kohli (85 not out) and Ajinkya Rahane (33) were the top scorers for India while Manish Pandey and skipper Mahendra Singh Dhoni contributed with 17 and 21 runs respectively.

Coming to the crease after the early dismissal of the out of form Rohit Sharma, Kohli proceeded to smash nine boundaries and a six during his 81-ball stint.

With the hosts on 188/4 after 33 overs, the Indian vice captain finished things off in style when he came down the track to smash leg-spinner Inderbir Singh Sodhi over his head for a six.

For the visitors, Douge Bracewell, James Neesham and Ish Sodhi took one wicket each.

The Indians were not really troubled at any point during the chase although off-colour opener Rohit Sharma departed early after being trapped leg before by Bracewell.

The in-form Rahane looked good for a half century before edging Neesham to Kiwi wicket-keeper Luke Ronchi.

Kohli then produced a 40-run stand with Manish Pandey and a 60-run partnership with Indian skipper Mahendra Singh Dhoni to ensure a 1-0 lead in the five-ODI series for India.

Earlier, riding on some disciplined bowling, India bowled New Zealand out for 190.

Opening batsman Tom Lathnam (79 not out) and pacer Tim Southee (55) were the top scorers for the visitors. Martin Guptill and Bracewell contributed with 12 and 15 runs respectively.

Latham played a defiant innings, keeping the Indian bowlers at bay even as wickets fell at regular intervals at the other end.

The left-hander smashed seven boundaries and a six during his 98-ball stay in the middle.

Southee was also in fine form with the bat, coming up with a breezy 45-ball knock that included six hits to the fence and three over it.

Pandya returned figures of 3/31 in his seven overs while Mishra cleaned up the lower order for figures of 3/49.

Jadhav, who picked up the first wickets of his fledgling ODI career, missed out on a hattrick after dismissing James Neesham and Mitchell Santner off successive deliveries.

He bowled only three overs to finish with figures of 2/6 while Yadav returned 2/31.

Asked to bat first by the hosts, the New Zealand innings ran into trouble soon after the start.

Pandya struck the first blow for India off the last ball of the second over when Martin Guptill edged one to Rohit Sharma at second slip.

Yadav accounted for Ross Taylor just four overs later when he found the outside edge with an outgoing delivery and Dhoni pulled off a relatively simple effort behind the stumps.

Pandya then removed Corey Anderson and Luke Ronchi in consecutive overs to leave the Kiwis reeling at 5/48 in the 13th over.

Jadhav then plunged the visitors into further trouble with back to back wickets in the 19th over.

The Maharashtra off-spinner clinched the first wicket of his ODI career with a caught and bowled effort when James Neesham misjudged the speed of the ball and could only chip it to the bowler.

Jadhav sent back Mitchell Santner off the very next ball with one that kept straight after pitching. Expecting the ball to spin away from him, Santner attempted a cut but was cramped for space and ended up edging it to Dhoni.

Latham and Doug Bracewell attempted a fightback with a partnership of 41 runs before the latter attempted a big hit off Mishra only to find Ajinkya Rahane at midwicket.

With New Zealand reeling at 106/8, Southee joined Latham in the middle. The pair proceeded to try and restore some respectability to the visitors’ total with a defiant 71-run stand.

They caused quite a few problems for the Indian bowlers, finding the boundaries and the sixes at regular intervals. However, Southee was undone while trying to go for another big shot off Mishra over long on and was beaten by the turn.

Mishra then trapped Inderbir Singh Sodhi leg before soon after to bring the New Zealand innings to an end. (IANS)