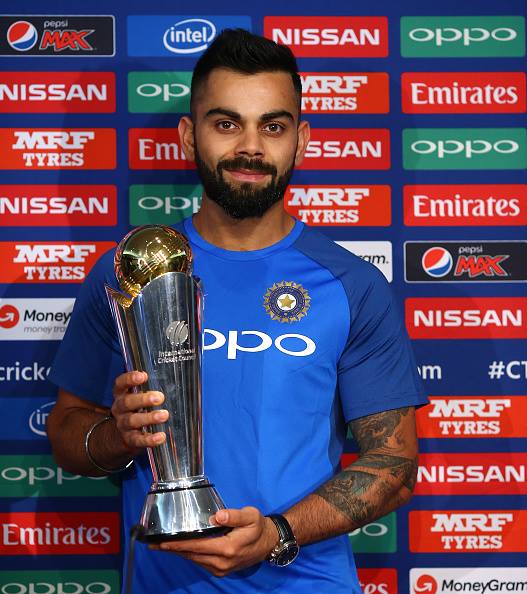 Saddled by off-field distractions, defending champions India will look to start their 2017 ICC Champions Trophy campaign on a high when they take on arch-rivals Pakistan in a Group B encounter at the Edgbaston Cricket Ground here on Sunday.

The Indian team have brought with themselves a cloud of discontent within the dressing room to English shores, as news of skipper Virat Kohli and a few other senior players not being on the same page with head coach Anil Kumble spread like wildfire.

Speculation had been rife ever since the Board of Control for Cricket in India (BCCI) chose not to automatically extend the tenure of Kumble, choosing instead to advertise the position on their website on May 25.

As it has emerged now, the decision was made following feedback from Kohli about Kumble’s coaching method, which he is said to have described as “intimidating”.

The legendary Indian leg-spinner, who has not put a foot wrong since being appointed as the coach, will see out his contract at the end of the eight-team tournament.

But what takes the attention away from the field where India have looked so good in the two warm-up matches against New Zealand and Bangladesh, is the fact that the Cricket Advisory Committee (CAC) comprising Sachin Tendulkar, Sourav Ganguly and V.V.S. Laxman will start looking for new names in London itself.

Though acting BCCI secretary Amitabh Choudhary has tried hard to bury the hatchet by saying that there is no conflict between captain and coach, and Kumble giving Kohli throwdowns at nets on Friday in front of media persons, the hornet’s nest has surely been stirred.

The Supreme Court-appointed Committee of Administrators (CoA) member Ramachandra Guha resigned from his post virtually confirming the frosty relations between Kumble and Kohli.

To make matters worse, in a letter to CoA head Vinod Rai, renowned historian Guha resigned from the four-member panel further highlighting the rift between CoA and the BCCI.

Coming to the much-awaited cricket match, millions of supporters are expected to tune in and watch the teams fight for national pride at Edgbaston on Sunday.

Due to diplomatic tensions between India and Pakistan, the two teams rarely lock horns against each other barring an International Cricket Council (ICC) event, and the hotly fought battle has over the years drawn a wide range of audience.

For almost 18 years, wars stood in between the two outfits playing each other in a bilateral series until the ice was broken in 1978, but even today matches are few and far between.

The two sides have not played a bilateral series since 2012-2013, and India have refused to juggle with the idea without an end to “cross border terrorism”, which essentially means militant incursions along the disputed Kashmir border.

Not only will a victory for either side mean taking a huge step towards the semi-finals in a four-team group which also has Sri Lanka and South Africa, it will also be a diplomatic point-scoring in terms of the stand-off between the two parties.

On the pitch, India would go into the tie as favourites, as former Pakistan skipper Shahid Afridi has also said — not only because of their emphatic 45 and 240 -run wins in the two warm-up games, but because the opposition doesn’t smell the same anymore.

Pakistan just made it to the Champions Trophy as the eighth and final nation ahead of the West Indies, who missed the bus.

Newly-appointed skipper Sarfraz Ahmed will face his stiffest test yet, leading an unfancied Pakistan who have to overcome serious batting deficiencies to be competitive following their struggles in the one-day format in recent years.

Missing the services of explosive opener Sharjeel Khan, who is currently facing a tribunal for spot-fixing and could face a life ban if found guilty, and Umar Akmal, booted out of the squad and sent home for failing two fitness tests; Pakistan will depend heavily on veteran Shoaib Malik and all-rounder Imad Wasim.

For India, it remains to be seen whether seasoned campaigner Yuvraj Singh, who has just recovered from viral fever, is pencilled in the playing XI.

Kohli can depend on his bowling to fire, as the likes of fit-again Mohammed Shami, Umesh Yadav, Bhuvneshwar Kumar and Jasprit Bumrah look in great shape.