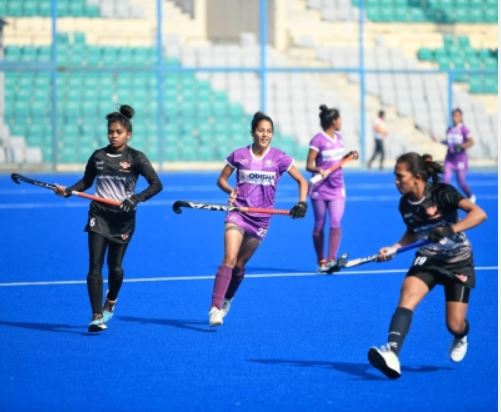 New Delhi: India Juniors swept to its fifth successive win and assured itself of the top spot in Group A in the inaugural Khelo India U21 Women’s Hockey League with a commanding 8-1 triumph over Odisha Naval Tata Hockey High Performance Centre at the Major Dhyan Chand National Stadium here on Monday.

If Odisha Naval Tata HHPC took the pitch with the thought of matching the Indian Juniors, those were brushed aside quickly. India Juniors forwards Deepika and Mumtaz Khan sustained their goal-scoring skills by contributing five goals today, the former taking her tally to 13 goals in five outings and the latter rising to second place in the list of scorers with 11 goals. Odisha Naval Tata HHPC’s late consolation goal came through the hard-working Munmumi Das.

With 15 points (and 40 goals) from five matches, India Juniors’ dominating has been complete. With a comfortable 5-0 win against Mumbai Schools Sports Association, Sports Authority of India B completed its engagements. SAI B assured itself of the second place in the pool with 13 points from four wins and a draw. Its only loss was against India Juniors.

Odisha Naval Tata HHPC’s second straight loss saw it fade away from the race for the second spot. It will now have to at least secure a draw in its final match against Khalsa Hockey Academy, Amritsar, to take the third place in the group. Him Hockey Academy, Vikas Nagar, Himachal Pradesh, can add to the pressure on Bhubaneswar team with a win on Tuesday.

In a crucial Group B match, when the Sports Authority of India A held Madhya Pradesh Hockey Academy, Bhopal, goal-less, it all but paved the way for Har Hockey Academy, Sonipat, to finish on top of the pool. Madhya Pradesh needed to win the game against SAI B but a second successive draw reduced its chances of mounting a challenge for the top spot.

Both Madhya Pradesh Hockey Academy and SAI A scrapped hard in their bid to win the match but did not find ways to break the deadlock. The intensity of battle was high, but in the end, it turned out to be the first goal-less game in 34 matches in the 14-team League. The Bhopal team can earn some bragging rights if its beats Har Hockey Academy in its last match on Tuesday.

Group B: Madhya Pradesh Hockey Academy drew with Sports Authority of India A 0-0.

21 December 2021 Panchang Today: Muhurat, Tithi, Nakshatra and all you need to know