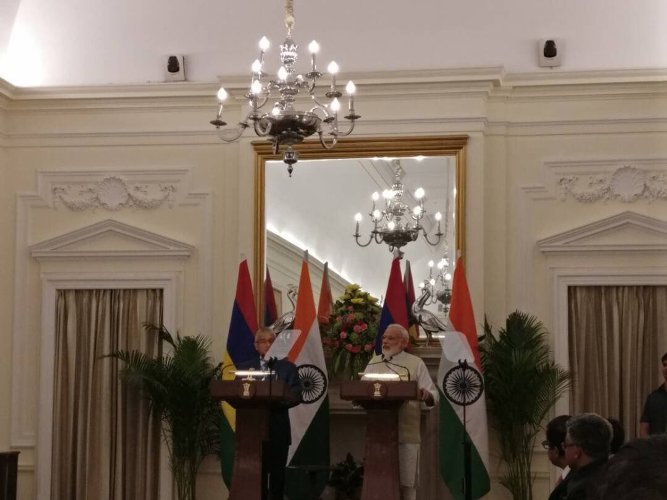 “As frontline states of the Indian Ocean, Prime Minister Jugnauth and I agree that it is our responsibility to ensure collective maritime security around our coasts and in our EEZs (exclusive economic zones),” Modi said while jointly addressing the media with the visiting dignitary following the talks.

“We agree that effective management of conventional and non-conventional threats in the Indian Ocean is essential to pursue economic opportunities, protect the livelihood of our communities and provide security to our people,” he said.

He said that both countries must be vigilant against piracy that impacted trade and tourism, drugs and human trafficking, illegal fishing and other forms of illegal exploitation of marine resources.

“The conclusion of the bilateral Maritime Security Agreement today will strengthen our mutual cooperation and capacities,” Modi said.

“We have also agreed to further strengthen our wide-ranging cooperation in hydrography for a secure and peaceful maritime domain.”

Modi also said that India would support the National Coast Guard (NCG) of Mauritius in augmenting its capacity through Project Trident, an integrated development project of the NCG.

“We have also taken a decision to renew the life of the Coast Guard Ship Guardian, that was provided to Mauritius, under a grant assistance programme,” he stated.

The Indian Prime Minister said that the agreement on a $500-million LoC from India to Mauritius was “a good example of our strong and continuing commitment towards the development of Mauritius”.

“It will also help in the implementation of priority projects,” he said. “Prime Minister Jugnauth and I welcome the progress in ongoing projects.”

Apart from the agreements on maritime security and the LoC, two memorandums of understanding were signed on research and education in marine sciences and technology and setting up of a civil services college in Mauritius.

Mauritius also submitted its instrument of ratification of the India-initiated International Solar Alliance, conceived as a coalition of solar resource-rich countries to address their special energy needs and provide a platform to collaborate on dealing with the identified gaps through a common, agreed approach.

“The signing and ratification of the framework agreement on International Solar Alliance by Mauritius has opened up new vistas of regional partnership for both countries in this field,” Modi said.

The Indian Prime Minister also expressed pride in the contribution of the people of Indian origin to the national life of Mauritius. Jugnauth is one among this huge number of people in Mauritius who are descendants of indentured Indian labour brought in the 19th century to work in sugarcane plantations.

On his part, Jugnauth said that both Mauritius and India agreed that there can be no compromise when it came to sovereignty and territorial integrity

“We have developed a strong bilateral cooperation between Mauritius and India in the field of defence and security,” he said.

Apart from this, he said he discussed with Modi the signing of a Comprehensive Economic Cooperation and Partnership Agreement (CECPA) between the two countries.

Earlier on Saturday, Jugnauth was accorded a ceremonial welcome at Rashtrapati Bhavan here following which External Affairs Minister Sushma Swaraj called on him.

Jugnauth arrived here on Friday on a three-day state visit to India. This is Jugnauth’s first visit abroad since assuming office this January. (IANS)