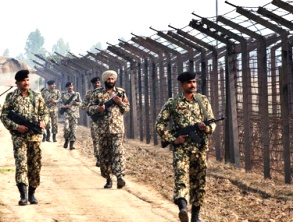 “During these counter-terrorist operation, significant casualties have been caused to the terrorists and those who support them,” Lt Gen Ranbir Singh, the Director General Military Operations (DGMO), told the media here.

The announcement followed a meeting of the Cabinet Committee on Security chaired by Prime Minister Narendra Modi.

Pakistan denied any surgical strike by India but admitted to the death of two soldiers in cross-LoC firing by Indian troops.

Sharif warned that Pakistan’s “intent for peaceful neighbourhood should not be mistaken as our weakness”.

Gen Ranbir Singh said the targeted terrorists had planned “to carry out infiltration and terrorist strikes in Jammu and Kashmir and various other metros in our country.

“The operation was basically focussed to ensure that these terrorists do not succeed in their design of infiltration and carrying out destruction and endangering the lives of citizens of our country,” he said.

Gen Ranbir Singh said the operation had since ceased. “We do not have plans of further continuation of the operations. However, the Indian armed forces are fully prepared for any contingency that may arrived.”

The surgical strikes were based on “very specific and credible information”, he said.

The Pakistani military said there were no surgical strikes by India, “instead there had been cross-border fire initiated and conducted by India which is existential phenomenon.

“As per rules of engagement, the same was strongly and befittingly responded by Pakistani troops. The notion of surgical strikes linked to alleged terrorist bases is an illusion being deliberately generated by India.”

On Thursday, Pakistani military shelled Indian positions across the Line of Control — which divides Jammu and Kashmir between the two countries — at Danesh and Lakshmi posts in Naugam sector, the Jammu and Kashmir Police said. The Indian military retaliated.

“Pakistani troops befittingly responded to Indian unprovoked firing on the LoC in Bhimber, Hotspring Kel and Lipa sectors,” it said.

Minutes after India announced the surgical strikes on Thursday, Prime Minister Sharif denounced what he called was an “unprovoked and naked aggression” by Indian forces.

“Our intent for peaceful neighbourhood should not be mistaken as our weakness as our valiant forces are fully capable of defending the territorial integrity of our country,” Sharif said.

He said Pakistan can “thwart any evil design made to undermine the sovereignty of Pakistan”.

The Indian DGMO said he spoke to his Pakistani counterpart and “explained our concerns and also shared with him the operation that we had conducted.

“It is India’s intention to maintain peace and tranquility in the region but we cannot — certainly not — allow the terrorists to operate across the LoC with impunity and attack the citizens of the country.

“We expect the Pakistan Army to cooperate with us to erase the menace of terrorism from our region,” he added.

“Indian troops are effectively retaliating Pakistani firing. Exchanges are still going on in the area,” the police added.
(IANS)