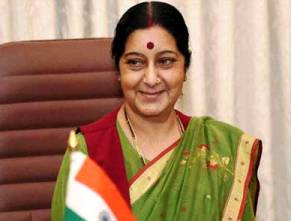 New Delhi: In a toughening of its stand, India on Thursday asked China to withdraw its troops from Doklam on the Bhutan-China border if it wanted New Delhi to pull out its Army from the area.

In the first exhaustive Indian comment on the border row between India and China that began over a month ago, External Affairs Minister Sushma Swaraj accused China of unilaterally trying to change the status quo on the frontier with Bhutan.

This is what had sparked off the stand-off between the Indian and Chinese armies, she told the Rajya Sabha.

The Chinese action “is a challenge to our security”, the Minister said, adding India was not doing anything unreasonable.

The stand-off started more than a month ago when Indian troops stopped Chinese soldiers from building a road on the tri-junction of India, Bhutan and China.

This has severely affected Sino-Indian ties, with Chinese experts threatening a war if New Delhi did not buckle.

“Foreign countries are with us. They feel that China is being aggressive with a small country like Bhutan. Bhutan has protested, including in writing. All the countries feel India’s stand is right and the law is with us,” Sushma Swaraj said.

“Over the years, China has been trying to get closer and closer to where the tri-junction point ends. It has done things like repair roads, re-tar them and things like that.”

She described what was different about the June 16 incident that led to the stand-off.

“This time though, they came with bulldozers and construction equipment with the aim of breaching the point where the tri-junction ends. That is a threat to our security,” she said.

On China’s One Belt One Road (OBOR) project, Sushma Swaraj said India had opposed it right from the beginning.

“As soon as we learned that they are making CPEC a part of OBOR, we registered our protest,” the Minister said, referring to the China-Pakistan Economic Corridor which passes through Pakistan-administered Kashmir that India calls its territory.
(IANS)