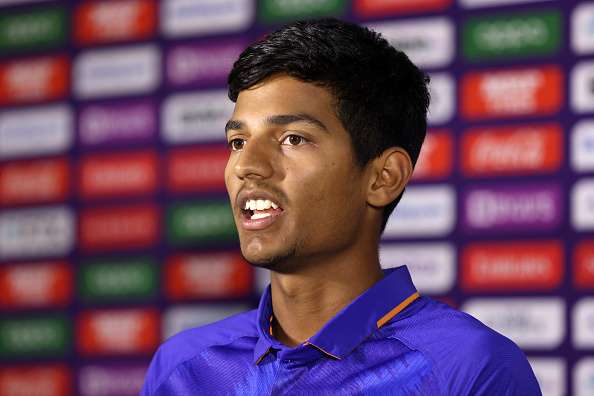 Antigua: India Under-19 Cricket World Cup-winning captain Yash Dhull would be laughing — or, perhaps, giving credit — to the boys in his neighbourhood in Delhi who didn’t allow him to touch their bat in his childhood days.

Snubbed by the older boys, Dhull started using his leg as a cricket bat to ‘hit’ the ball. On Sunday night (IST) at the Sir Vivian Richards Stadium here, 19-year-old Dhull guided India to its fifth U-19 ICC Cricket World Cup title with a four-wicket win against England, joining the likes of Mohammad Kaif and Virat Kohli, among other, who led India to the title earlier in their careers.

It was in 2008, when the six-year-old Yash residing in Janakpuri, West Delhi wanted to have a feel of the cricket bat in his neighbourhood. The kid tried to convince the older boys to let him play cricket with them, but they refused. Yash’s mother was witnessing the scene from the balcony. She saw her child’s dogged determination to play the game as the youngster started using his leg as a cricket bat to ‘hit’ the ball.

The very next day she took Yash to coach Pardeep Kochar. The boy hasn’t looked back since. The 19-year-old Yash emerged the leading run-getter in the Vinoo Mankad Trophy in 2021. He averaged 75.50 for his 302 runs for the DDCA in the five matches the team played in the tournament.

In the West Indies, despite being laid low by COVID-19 after the opening U-19 World Cup game and being forced to isolate for more than 10 days, Dhull came back with purpose and determination to first guide India to a quarterfinal win against Bangladesh and then a massive victory against Australia in the semifinals.

Though he could manage only 17 in the final against England, his leadership qualities came to the fore as Raj Bawa, Shaik Rasheed and Nishant Sindhu played key roles in the title triumph.

Speaking to IANS before he left for the U-19 World Cup, the cricketer had given credit to his mother for the success, saying that whatever he had achieved so far was because of her.

“My mother used to take me to the academy (Airliner cricket academy). She believed in me and my family then backed me. So, credit goes to them. Also, my coaches Pradeep Kochar sir and Rajesh Nagar sir (of Bal Bhavan International School’s academy ground) for providing me cricketing knowledge and guiding me well. They keep helping me get better and better,” Yash had told IANS.

Talking about his journey, Yash had said, “Well, I was six when I started my training under Pardeep sir. I wanted to play cricket with the boys in my neighbourhood but they were older than me and didn’t share their bat and I started playing cricket with my leg… I held my leg like a bat and started hitting the ball. My mother watched me and took me to the academy. So, it all started from there.”

Dhull said that he has no favourite cricketers in the India team and likes learning their good points. “I take learnings from all the cricketers and their positive approach towards the game. There’s no particular cricketer; they all are my favourite.”

Former India player and the coach of the World Cup-winning U-19 team Hrishikesh Kanitkar said that he likes the leadership and instinctive qualities of Dhull.

“The primary quality you need to become a captain of any team is that you should have the respect of your team,” Kanitkar had said during the course of the tournament.

“Without that, you can be a good captain or player, but you would not be able to do the job. Yash (Dhull) has got the respect of all his players. He is able to take tough calls on the field when it is needed, every time a captain cannot be told to do things. The captain needs to take his own decisions and Yash can do that. It (Dhull’s captaincy) is pretty instinctive; Yash’s instincts are fine and he is able to do justice to the job,” Kanitkar had said.