Indian Army shall give proper reply to Pakistan: Rajnath

INDIAINDIA & BEYOND
By Sambad English Bureau On Feb 5, 2018 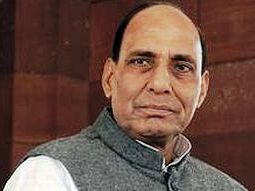 New Delhi: Union Home Minister Rajnath Singh on Monday condemned the cross-border firing by Pakistan in which four Indian soldiers, including a Captain, were killed, saying he has full faith in the valour of the Indian Army and they shall “give proper reply” to the neighbour.

“Have full faith in the valour of our soldiers, and they shall give proper reply,” Rajnath Singh told reporters.

“Pakistan has been violating ceasefire along the LoC. And this year the number of ceasefire violations are high,” Ahir said.

“Yesterday (Sunday) also, they again violated ceasefire. We will not forgive Pakistan’s actions,” the Minister said.

“The ceasefire violations would prove to be Pakistan’s foolishness and will cost them dearly,” he added.

Union Minister for MSME, Giriraj Singh also slammed Pakistan for the ceasefire violations and said, “Have faith in the Indian Army. When the right time comes they shall give a proper reply to them.”

Referring to the 2016 surgical strikes, the Minister said, “When the Army carried out surgical strikes it didn’t tell the media about it. Similarly they shall act accordingly at the right time.”

He said India has been following international laws. “There is a Hindi saying in Bihar ‘latkhor’ (addicted to being beaten), and similarly Pakistan is ‘latkhor’ and thus proper reply would be given to them,” he added.

The Minister’s remarks came in the wake of the increased cross border firing in Kashmir valley.

On Sunday, four Indian soldiers were killed and four others were injured in firing in Rajouri and Poonch districts.

The killed soldiers included Captain Kapil Kundu, who would have celebrated his 23rd birthday on February 10. Hailing from Haryana’s Gurugram, he is survived by his mother Sunita.

The others were Riflemen Ramavatar, 27, from Baraka village in Madhya Pradesh’s Gwalior, besides Subham Singh, 23, from Kathua and Havilder Roshan Lal, 43, from Samba in Jammu and Kashmir. (IANS)