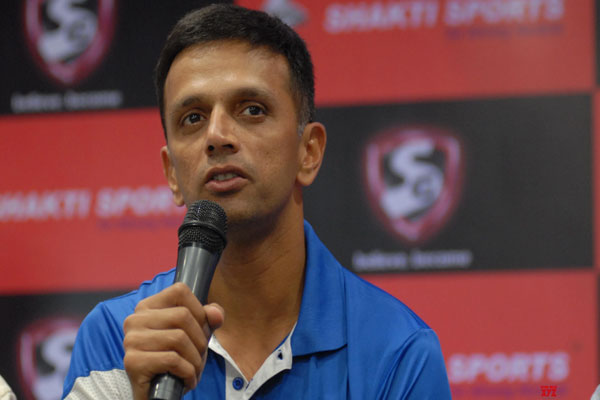 New Delhi: Rahul Dravid, a former India captain and director of cricket at Indian board’s National Cricket Academy (NCA), has said he gives every player an opportunity on India A tours to ensure they don’t face the frustration he had to face as a youngster.

“I tell them upfront, if you come on an A tour with me, you will not leave here without playing a game,” Dravid was quoted as saying by The Cricket Monthly.

“I’ve had that personal experience myself as a kid: going on an A tour and not getting an opportunity to play is terrible. You’ve done well, you scored 700-800 runs, you go, and you don’t get a chance to show what you’re good at. And then you’re back to square one from the selectors’ point of view, because the next season you have to score those 800 runs again,” added Dravid who is likely to accompany the India white-ball team on tour of Sri Lanka. He has travelled as coach of India A and India under-19 teams.

“It is not easy to do that, so there is no guarantee you’ll get a chance again. So you tell people upfront: this is the best 15 and we are playing them. This is not about the supposed best XI. At U-19, we make five-six changes between games if we can,” he adds.

They pick a set of 150 players from across the domestic structure and give them real match practice and also accompany them to India A and India under-19 tours.

Dravid said that while passion in India is high, youngsters need to get facilities and training to be able to reach and perform at the highest level.

“Playing on the beach and playing on the road doesn’t make you a cricketer. It makes you someone who loves the game. That’s what we had. We had a lot of people who loved the game,” added Dravid.

“Unless you give that guy a proper matting wicket or a turf wicket, unless you give him some half-decent coaching, some half-decent fitness assistance — where was all this in the 1990s and the 2000s? There was no access to it. We were starved of knowledge. Even in terms of fitness, we used to look at the Australians and South Africans and we used to look at their fitness trainers, and what did we get? ‘Don’t do too much gym, your body will become stiff. Bowl, bowl and bowl. Run rounds and laps’,” he was quoted as saying.