‘Indian rocket failure not be due to design fault’ 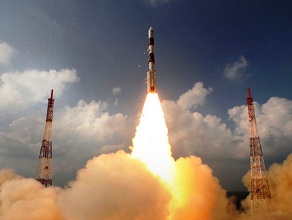 Chennai: The non-separation of the heat shield of the PSLV, which trapped within itself the navigation satellite and resulted in a failed mission on Thursday, could be due to failure of component quality or quality checks, not a design failure, space technology experts said.

“The PSLV rocket has been successful for the past several years. So the question of design failure does not arise. It could be an issue of a failed component or a process quality issue,” M.Y.S. Prasad, a former Director of the Satish Dhawan Space Centre, told IANS.

Satellites are housed atop the rocket and covered by a heat shield (payload fairing, in technical language) which protects them from getting burnt when the rocket crosses the atmosphere at high speed.

In Thursday’s mission, the heat shield should have separated just over three minutes into the flight so that navigation satellite IRNSS-1H could be ejected into orbit later, but it didn’t happen.

This is the first time that a satellite launch mission has failed due to this reason, perplexing current and former officials of the Indian Space Research Organisation (ISRO).

“It is really perplexing that such a thing has happened. Normally, the PSLV rocket has several redundancies built into it,” R.V. Perumal, a former ISRO scientist, told IANS.

Noting all the commands are pre-planned and built into the computers, he said that there cannot be any manual command.

“The computers have to give the necessary commands. The commands have to be relayed by the electrical circuits. The pyro circuit has to get initiated which, in turn, has to cut the mechanical elements so that the two parts of the heat shield get separated,” he said.

Prasad maintained that something could have gone wrong in this four-step sequence or in the sub-systems, as redundancies have only been built into some systems.

“The computer programmes may have several redundancies to take care of an eventuality. So they can be tested on ground before and also during preparation for the flight. The electrical circuits and some pyro elements will also have redundancies.

Ruling out design failure, Prasad said the most probable cause of failure could be the quality of a rocket component or some error in the assembly of systems.

However, one positive aspect of the Polar Satellite Launch Vehicle (PSLV) failure is that all data are available up to satellite separation which would make the job of the failure analysis committee a bit easier.

The Indian space agency should also look at its quality check systems. One of India’s heaviest rockets, the Geosynchronous Satellite Launch Vehicle (GSLV), was lost due to a faulty component.

In 2006, the GSLV-F02 went out of control less than a minute after liftoff and had to be destroyed in air after it started breaking up.

The reason for the failure, the analysis report revealed, was that one of the propellant regulators had a manufacturing defect of a “much higher discharge coefficient in its closed condition”, which escaped the inspection and acceptance test procedure.

This defect could stem from an “inadvertent error in manufacturing, which escaped the subsequent inspection, and acceptance test procedures” as the component functioned satisfactorily in all the previous 50 engines manufactured and tested so far, it said.

The two successive failures of GSLV missions in 2010, resulting in a total loss of around Rs 600 crore (cost of rocket and satellites), had already stalled ISRO’s plans and it is only now that the GSLV rocket plans are getting back on its rails.

PSLV is a four-stage (engine) rocket powered by solid (first and third) and liquid propellants (second and fourth) alternatively.

The rocket that failed on Thursday was the more powerful variant called PSLV-XL.

But for two failures — one in 1993 and the other on Thursday — the PSLV has an excellent success record launching several Indian and foreign satellites.

Incidentally, the launch of the first navigation satellite IRNSS-1A was also postponed from its original launch date after a problem was discovered in one of the electro-hydraulic control actuators in the rocket’s second-stage engine.

The second stage had to be dismantled to replace the actuator, which is an assembly of several components. It weighed around 20 kg.

ISRO also had earlier dismantled a fully-assembled PSLV rocket to check a component in the rocket’s second stage.

In 2010, a fully-assembled PSLV rocket was dismantled to replace a gas motor in its second-stage engine. The gas motor powers the rocket’s second-stage control actuators for manoeuvring the engine’s nozzle — a process called gimballing, which enables the rocket to maintain a steady course on its way up.

ISRO officials were not available for comments despite several attempts by IANS.

‘Samsung’s next foldable phone to be called Galaxy Z Flip’