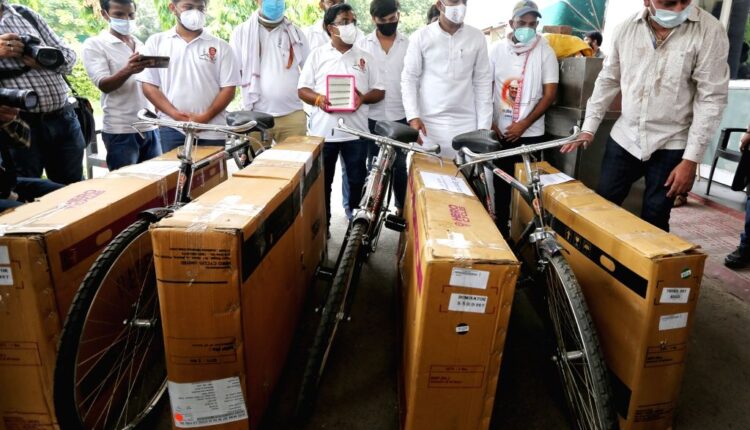 New Delhi: Amid the rise in the prices of petrol and diesel across the country, the Indian Youth Congress (IYC) on Thursday sent bicycles through courier to Prime Minister Narendra Modi, Union Home Minister Amit Shah and several others as a mark of protest.

The IYC activists under the leadership of National President Srinivas B.V. expressed outrage on the rising petrol and diesel prices.

The IYC members also showed the mirror to the central government so that the government could wake up from its sleep and remember its promises which they had made to the people of the country before elections.

“The government is constantly giving a blow to the people who have been stricken by the policies of the government. In such an odd situation, no government in the world would have committed so many atrocities on its people as the Modi government is doing. Petrol and diesel prices have been increased 43 times in the last five months,” Srinivas said.

He said that when BJP was in opposition, it was seen demonstrating on the streets on the increase of Rs 5 on petrol and diesel, but today when there is all-round inflation, everyone is silent.

He said that today IYC has tried to wake them up from sleep, in many parts of the country, petrol has crossed Rs 100, diesel has crossed Rs 90, the shameful thing is that despite doing such open loot, the BJP government is again blaming the Congress for this price rise.

“The Modi government has made a big dent in the budget of the common man, which they are unable to cope with, in the last 13 months the price of petrol has been increased by Rs 25.72 and the price of diesel by Rs 23.93 and in the last five months the fuel prices have been increased 43 times,” he said, adding that it is the effect of the policies of the Modi government that a new record is being set in the prices of petrol and diesel.

Targeting the government, he said that the anti-people face of the RSS and BJP has been revealed to the people.

He also said that the people of the country had chosen Modi and his ministers on the promise of ‘Achhe Din’, now he and his government have broken the trust of the people.

He demanded that the excise duty on petrol and diesel should be reduced and the increased prices should be withdrawn with immediate effect, and if the Petroleum Minister cannot do this, then he should resign at the earliest.

IYC national media In-charge Rahul Rao said that this government and its ministers have no understanding of the economy.

“Inflation is already on the rise. We demand that the increased prices should be withdrawn with immediate effect and relief should be given to the people suffering from inflation and recession by returning the hike in excise duty,” he said.

He further said that when the ministers of the Modi government were in opposition, they used to protest on the road on a minor increase, but today all of them and all other BJP leaders are silent, the people of the country will never forgive this behaviour.

Two ECMO machines to be installed at AIIMS Bhubaneswar soon

Now, LPG consumers can decide their refill distributor; here’s how