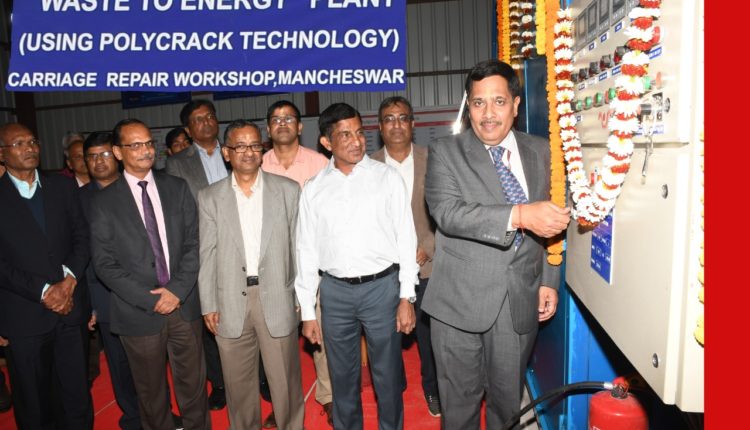 The Waste to Energy Plant, a patented technology called Polycrack, is first of its-kind in Indian Railways and fourth in the country. It converts multiple feed stocks into hydrocarbon liquid fuels, gas, carbon and water.

Earlier, lots of non-ferrous scrap generated from the Carriage Repair Workshop had no efficient method of disposal. As a result, these elements were being disposed by landfills which had hazardous impact on the environment. The polycrack technology does not emit any hazardous pollutants into the atmosphere. The combustible, non-condensed gases are re-used for providing energy to the entire system. The emissions from the combustion are found to be much less than prescribed environmental norms. The process will produce energy in the form of light diesel oil, which is used to light furnaces.

The plant at Mancheswar Carriage Repair Workshop has been constructed in a period of three months. Around Rs 2 crore has been spent for commissioning of the polycrack plant. Waste generated from the Mancheswar Carriage Repair Workshop, Coaching Depot and Bhubaneswar Railway Station will be feeder materials for this plant. This plant will access 500 kg waste materials per day. About Rs 17 lakh income per annum will be generated from the byproducts, said an official.