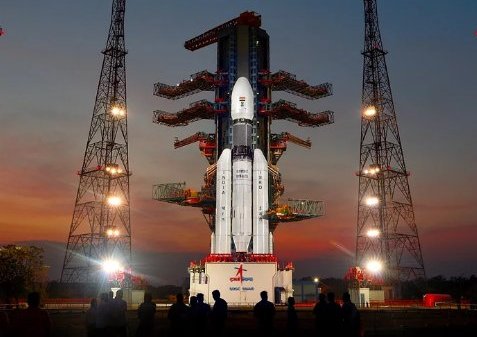 India’s brand new and heaviest rocket – the Geosynchronous Satellite Launch Vehicle-Mark III (GSLV-Mk III) – with the 3,136 kg communication satellite GSAT-19 on board, blasted off from the Sriharikota spaceport on Monday.

Precisely at 5.28 p.m., the GSLV-Mk III rocket, on its maiden flight, began its ascent towards space from the second launch pad at the Satish Dhawan Space Centre (SDSC).

The GSAT-19, as per the Indian Space Research Organisation is a multi-beam satellite that carries Ka and Ku band forward and return link transponders and geostationary radiation spectrometer (GRASP) to monitor and study the nature of charged particles and the influence of space radiation on satellites and their electronic components.

The GSLV-Mk III is a three stage/engine rocket. The core of first stage is fired with solid fuel and its two motors by liquid fuel. The second is liquid fuel and the third is the cryogenic engine.

The Indian space agency had flown a similar rocket without the cryogenic engine but with 3.7-tonne payload in 2014 mainly to test its structural stability and aerodynamics.

Liquid Propulsion Systems Centre Director S. Somanath, told IANS that the inputs of the 2014 mission enabled the ISRO to reduce the rocket load by around 20 per cent.

Interestingly, GSLV-Mk III at around 43 metres is slightly shorter than Mk-II version that is around 49 metres tall.

ISRO officials told IANS that due to the increase in the diameters of various stages, the height got reduced despite a drastic increase in the weight – from around 415 ton of GSLV-Mk II to 640 ton in GSLV-Mk III.

“The new rocket may be slightly short but has more punch power,” said an ISRO official.

India presently has two rockets — the Polar Satellite Launch Vehicle and GSLV-Mk II — with a lift-off mass of 415 tonnes and a carrying capacity of 2.5 tonnes. (IANS)