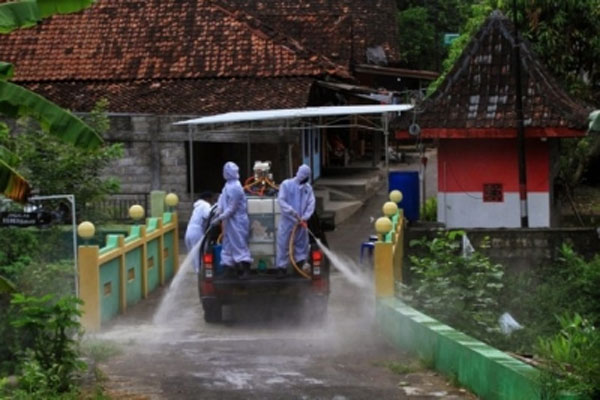 Jakarta:  Concerns about a Covid-19 resurgence in Indonesia following the Eid al-Fitr may come true as the government has predicted that there would be a 50 per cent rise in positive cases in mid-June.

The daily confirmed active cases began to show an increasing trend in recent days in the country.

“The rate of the national active cases stands at 5.4 per cent, lower than the global figure of 8.8 per cent. However, we need to anticipate the increasing trend of active cases since the past week,” the Mnister said.

Airlangga pointed out that based on data as of May 26, 55.6 per cent of these active cases were found in Java Island and 22.9 per cent in Sumatra Island.

Given the fact, he decided to extend the micro-scale restrictions of people’s activities from June 1 to 14, and expand the areas that will implement the policy to four provinces, namely Maluku, North Maluku, Gorontalo, and West Sulawesi.

“Thus, as of June 1, a total of all 34 provinces have been determined to implement the policy,” he said.

After monitoring for two weeks, the government will continue to closely observe the progress of the cases in the next two or three weeks, and tighten travel requirements after the holidays, Airlangga explained.

Previously, Transportation Minister Budi Karya Sumadi said that during the period from April 22 to May 14 (before and during the Eid holidays), there were 3.9 million passengers travelling by land, sea and air.

In the May 15-24 period (after the Eid holidays), there were around 2.5 million passengers using public transportation means.

This condition showed the potential for a surge in the public mobility.

Coordinating Minister for Human Development and Culture Muhadjir Effendy called on the local governments whose areas could be sources of the spread of the virus to check the implementation of the policy to control the transmission of the virus.

In addition, he said the government has been on the alert of the spread of new variants.

Meanwhile, the Indonesian Medical Association’s Chairman Daeng M Faqih called on about 200,000 doctors in the country to be prepared until the end of July to face the possible resurgence.

The Association has issued a policy that all doctors in Indonesia should be able to tackle Covid-19 cases and they will have special trainings in efforts to handle the disease, he added.