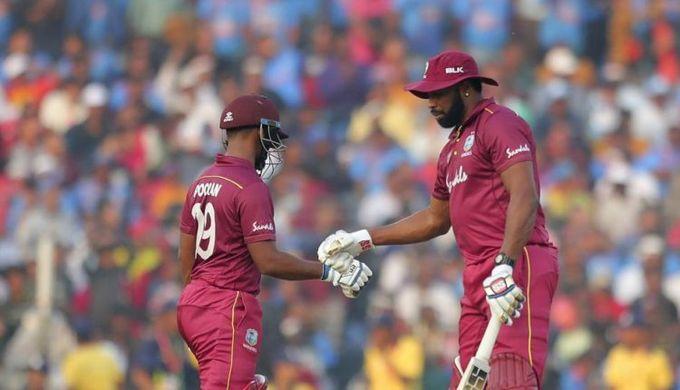 Cuttack: A late flourish led by captain Kieron Pollard and Nicholas Pooran helped the West Indies set up a competitive target of 316 for India to chase at the Barabati Stadium in Cuttack on Sunday. Pollard and Pooran put up a 135-run stand for the fifth wicket to revitalise the West Indies innings which was struggling until then.

Pooran scored 89 off 64 balls and his innings included 10 fours and three sixes. Pollard, on the other hand, smashed 74 off 51 balls, his innings punctuated by three fours and seven sixes.

West Indies hit 32 runs off the last two overs, most of which came from Pollard alone. They hit a total of 118 runs in the last 10 overs.

India kept the visitors in check for most of the innings. At the 30-over mark, West Indies were 137/3 with Evin Lewis (21) and the in-form Shai Hope (42) and Shimron Hetmyer (37) all back in the hut. Navdeep Saini, making his ODI debut dismissed Hetmyer and Roston Chase (42) while Mohammed Shami and Ravindra Jadeja took the wickets of Hope and Lewis, respectively, in the first 20 overs.

Kuldeep Yadav could not get a scalp and thus remained one wicket away from becoming the joint-fastest Indian to reach 100 ODI wickets.

Fielding and catching has been an issue for India throughout this series and that continued in Cuttack, albeit the catching chances they had this time were not straightforward. Hetmyer and Chase were give second leases of life. India had also taken an unsuccesfull review against Pollard in the 34th over.

India are looking to avoid a second consecutive series loss in ODIs at home. They had previously lost to Australia in March 2019.