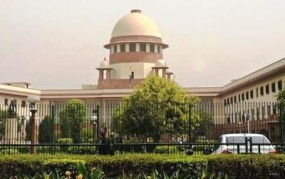 New Delhi: The Supreme Court on Thursday held that inherited property of a female Hindu dying issueless and intestate, will either go to the heirs of her parents or husband.

Explaining the provisions of the Hindu Succession Act, a bench of Justices S. Abdul Nazeer and Krishna Murari said: “The main scheme of this Act is to establish complete equality between male and female with regard to property rights and the rights of the female were declared absolute, completely abolishing all notions of a limited estate.”

It further added that the Act brought about changes in the law of succession among Hindus and gave rights which were till then unknown in relation to women’s property. “The legislative intent of enacting Section 14 (I) of the Act was to remedy the limitation of a Hindu woman who could not claim absolute interest in the properties inherited by her but only had a life interest in the estate so inherited,” said the bench.

The judgment came on an appeal filed by the legal heirs of Arunachala Gounder, as it set aside the verdicts passed by Madras High Court and the trial court. “Unfortunately, neither the trial court nor the High Court adverted itself to the settled legal propositions which are squarely applicable in the facts and circumstances of the case,” said the top court.

The bench noted that the right of a widow or daughter to inherit the self-acquired property or share received in partition of a coparcenary property of a Hindu male dying intestate is well recognised not only under the old customary Hindu law but also by various judicial pronouncements.

It said if a female Hindu dies intestate without leaving any issue, then the property inherited by her from her father or mother would go to the heirs of her father whereas the property inherited from her husband or father-in-law would go to the heirs of the husband. “The basic aim of the legislature in enacting Section 15(2) is to ensure that inherited property of a female Hindu dying issueless and intestate, goes back to the source,” said the bench.

It added that the Act lays down a uniform and comprehensive system of inheritance and applies, inter-alia, to persons governed by the Mitakshara and Dayabhaga Schools and also to those governed previously by the Murumakkattayam, Aliyasantana, and Nambudri Laws.

“The Act applies to every person, who is a Hindu by religion in any of its forms including a Virashaiva, a Lingayat or a follower of the Brahmo Pararthana or Arya Samaj and even to any person who is Buddhist, Jain, or Sikh by religion excepting one who is Muslim, Christian, Parsi or Jew by religion,” it added.