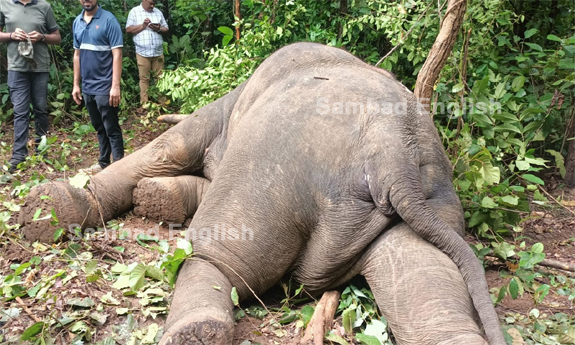 Betanati/Baisinga: An injured elephant died today morning in Masinakati reserve forest under Betanati range of Mayurbhanj district, just a day after the tusker was operated. However, many locals have blamed it on utter ‘neglect’ of the Forest department alleging that the jumbo should have been provided requisite medical treatment much before it was too late.

According to a senior forest official, the singled out pachyderm was previously roaming in Dumapada, Khadisola, Kanchannagar, Masinakati and Tungadhua localities under Betanati range for past few days. A thick plastic rope got tied to the animal’s left side front leg while it as moving from one place to another. Subsequently, the rope got tightened and caused severe injuries, thereby hindering natural movement of the elephant. The wound gradually produced bad odour and bled, the official added.

As the wound grew larger, the tusker had started wreathing in pain, the source expressed.

On learning about it, forest personnel from Betanati range reported the matter to their departmental higher-ups. Following which, a team of experts comprising Dr Brajaraj and Rudranarayan Mohapatra from Wildlife Trust of India (WTI), professor Indramani Nath from Odisha University of Agriculture and Technology (OUAT) and Dr Piyush Soren from Similipal Tiger Reserve including a number of veterinary doctors had reached the spot Sunday and had provided treatment to the injured elephant.

The jumbo was around 35 to 40 years of age. Perhaps, the animal died due to septicemia. “Despite all attempts the injured tusker could not be saved,” the senior forest official said.

Post-mortem of the pachyderm was conducted later in the day and various pathological samples were collected for testing in the laboratory to ascertain the actual cause of death.

Meanwhile, some environmentalists and animal lovers decried the undue delay in providing treatment on part of the Forest department. Animal hunters lay traps in forests and the elephant sustained injury in one such trap. The forest officials should have been proactive, they opined.