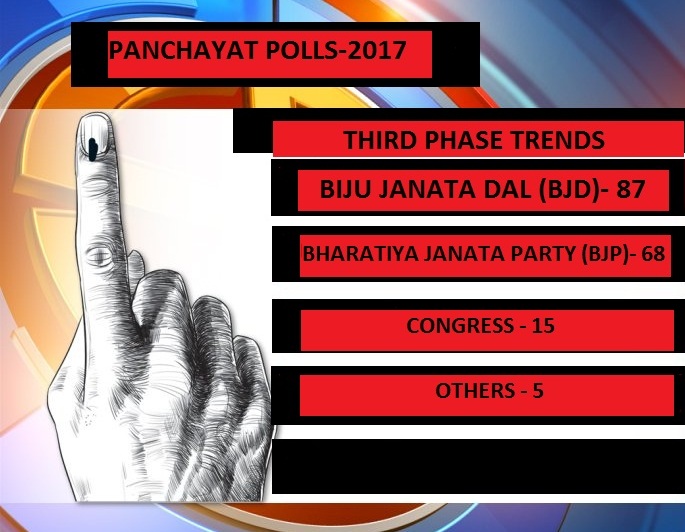 While the third-phase of the three-tier Panchayat polls ended today, www.odishasuntimes.com brings you the trends in the Zilla Parishad (ZP) zones polled across the state so far.

The compilation runs in reverse order with the latest results on the top. Find the below tables for a tentative idea on the voting pattern.

In the third phase of the rural polls, the voter turnout was 75 percent.

TRENDS IN THIRD PHASE PANCHAYAT POLL HELD ON FEBRUARY 17 ARE AS FOLLOWS:

In the second phase of the rural polls, the voter turnout was 73 percent.

TRENDS IN SECOND PHASE PANCHAYAT POLL HELD ON FEBRUARY 15 ARE AS FOLLOWS:

In the first phase of the rural polls, the voter turnout was 71 percent.

TRENDS IN FIRST PHASE PANCHAYAT POLL HELD ON FEBRUARY 13 ARE AS FOLLOWS:

It may be mentioned here that the above figures have been compiled from data provided by polling agents of the respective political parties present at the polling booths during counting of votes.

The State Election Commission (SEC) would declare the official results after the final counting of votes after the culmination of five-phase Panchayat polls, including re-polls in the state. The schedule of official declaration of results is: Gram Panchayat – February 23, Panchayat Samiti – February 25, and Zila Parishad – February 25.