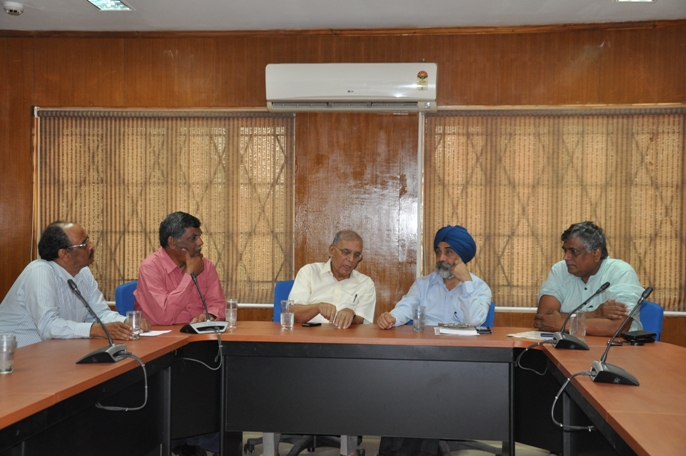 A three-member delegation led by INTACH State Convener Amiya Bhusan Tripathy on Wednesday handed over a memorandum to Pritam Singh, the Director General of the National Archives of India at Bhubaneswar Centre, requesting him for transferring many Odisha related documents and records from New Delhi.

The delegation comprised of Bhubaneswar Chapter Convener Baikuntha Panigrahi and Project Coordinator Anil Dhir as the members appraised Pritam Singh of the difficulties faced by scholars and researches who have to go to Delhi to access the records.

The New Delhi office is holding many important and valuable records pertaining to Odisha, many of them have not even been listed, the delegation said in the memorandum.

In the memorandum, they specifically mentioned that the entire records of the Orissa State Agency (1917-1947) in 18 Volumes, the Balasore Factory Records and The Bengal Public Consultations in 22 Volumes are of great importance, and the only copies are in Delhi.

Presently, scholars and researchers from Odisha have to go to Delhi for their work. You have a full-fledged facility at Bhubaneswar with all necessary amenities. Hence we request you to please transfer all the Odisha related papers to the Bhubaneswar Regional Office, they said in the memorandum.

They also requested to publish a detailed list of the papers pertaining to Odisha that are there in the National Archives at Delhi and its other centres all over the country.

According to Tripathy, the lack of proper access to records and documents, both from the National and the State Archives is a big hindrance for proper research and writing correct history. He said that if the originals could not be brought, the digitized version and microfilm copies could be easily made available. He stressed that a proper catalogue and listing of the Odisha papers should be made and published as a book.

Researcher Anil Dhir stressed that important documents like the original Will of Maharaja Ranjit Singh in which he had bequeathed the Koh-I-Noor to the Jagannath Temple should be displayed at the Bhubaneswar centre.

He said that the dearth of proper records was an impediment when the history of the Na’Anka Durbhikshya was being written by him. He said that many important documents relating to the Paika Revolt too are there. Dhir said that the India Office Library at London has the biggest collection of Orissa related papers, especially of the Colonial period including a vast collection of Palm Leaf Manuscripts which have all been either microfilmed or digitized. They have been classified under the Private Paper Series and are available to scholars on-line in the Continent and America. The National Archives of India too should make arrangements for on-line access to these records.

He has also found a huge collection of Odisha related material at the William Carey Library at Serampore, many of which are missionary accounts, Jagannath Temple records, maritime and military records and botanical, geological and zoological studies.

Even the Asiatic Society at Kolkata has a huge collection of maps, papers and photographs relating to Odisha. Besides this, important Odisha related papers were lying boxed in the Tamil Nadu Archives at Chennai and the West Bengal State Archives; no one knows what they contain, Dhir said.

Delegation member Baikuntha Panigrahi said that the only copies of the ‘Daridra Nian’ by Gangadhar Mishra, a proscribed literature are there at the Delhi Office of the National Archives.

He said that the National Archives should make its publications available at the Bhubaneswar Centre and also take up the printing of many rare and out of print Odia books. He also stressed that the Orissa State Archives too should catalogue and list the huge number of stored documents and take steps for the easy dissemination of these information.

The Director General said that the National Archives was in the process of digitizing nearly 3 crore documents and assured that he would prioritize the important Odisha papers.

Notably, the National Archives of India (NAI), which just completed its 125th anniversary, is under the Ministry of Culture. It has a Regional Office at Bhopal and three Records Centres at Jaipur, Puducherry and Bhubaneswar.