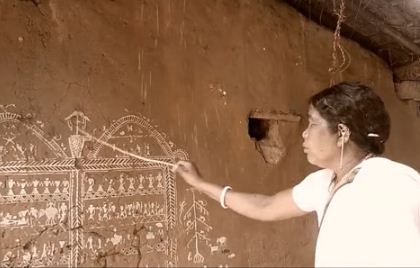 Bhubaneswar: Not just the beaches, the waterfalls and the hills, Odisha’s diverse and rich culture is what makes it all the more beautiful. Tribal art is another aspect that inspires awe. And it made Odisha-born archaeologist Jitu Mishra trek the hilly terrains of Niyamgiri and villages nearby in Rayagada district to meet the last of Lanjia Saura artist Lakhmi Sabara.

Sauras mainly do paintings on the mud walls of their houses using natural colours and bamboo brushes. These are mostly based on religious and ceremonial themes.

They use geometrical patterns in wave-like structure, displaying glory of nature through trees, animals and tribal people.

In her early 50s, Lakhmi is seen explaining Saura art, which continue to draw attention for its elegance, charm, aesthetic and ritualistic association, in a video.

The ancient tribes that she belongs to were the original worshippers of Lord Jagannath.

This tribe in the southern part of Odisha speak Mundari language. “Their practices are very organic and basic. They also perform rituals before consuming nature’s harvest. Out of all these things, what really fascinated me was their shamanic belief,” said Jitu.

Around 99.9% of this tribe has converted to Christianity. “Lakhmi and her husband continue to follow all their belief close to nature and forests. Some youngsters there, well-educated, feel bad for not having been told about their rich culture,” he added.

The objective, Jitu said, was to explore their lifestyles and take a closer look at the problems they face. “It’s a part of my company Virasat-e-Hind’s project that aims at bridging the gap between academic world and common people,” he added.