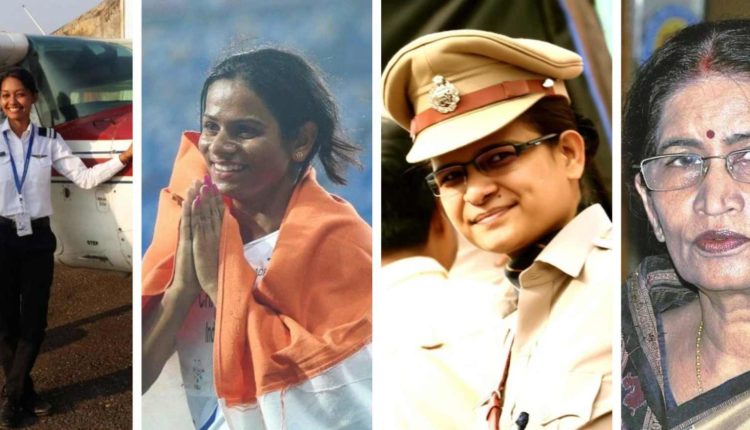 Today’s women are skilled and multi-taskers. Breaking all stereotypes, they shine in the fields of art, culture, business and sports. Also, their success stories have been inspiring thousands of others. But ever wondered who inspired these women achievers?

This International Women’s Day, Sambad English spoke to some of the established Odia women and found out who inspires them.

1. Anupriya Lakra: The 27-year-old is the first woman commercial pilot from the Maoist-affected district of Malkangiri. She quit her engineering course midway to give a shot at her dream to become a pilot. Anupriya was born to Havildar Mariniyas Lakra and home-maker Jamj Yashmin Lakra. In 2012, she quit her engineering studies and joined the Government Aviation Training Institute (GATI). Later she was appointed as a co-pilot for a private airlines.

2. Dutee Chand: The ace sprinter and current national champion in the women’s 100 metres event became the first Indian sprinter to win gold at the Universiade with a record of 11.32 seconds in the 100-metre race. A recipient of a number of medals including bronze, silver and gold at various championships, Dutee was born to a less privileged weavers’ family in Jajpur. But, difficult times could never shake young Dutee’s dream to become a successful athlete of the country.

On the occasion of International Women’s Day, Dutee talked about the ‘heroes’ of her life.

“I have been lucky for having the support of two women in my life. They stood as rock-solid support systems for me. One is my sister Saraswati Chand, who supported me to achieve my dream to become an athlete. She provided all kind of assistance that is required for training. Another woman is Payoshini Mitra, a gender and sports researcher. She helped me fighting the case of suspension against Athletes Foundation of India in 2014.”

The 24-year sprinter further said, “We all possess the capabilities to carve our own success stories. It just requires little courage and some hard work. So, I urge all the women out there to dare to dream and work hard to achieve their goals. I would also request all the men to support women in their journey so that no woman is left behind.”

3. Sagarika Nath: The IPS officer from 2016 batch serves as the DCP (Traffic), Police Commissionerate, Bhubaneswar-Cuttack. A native of Dhenkanal, the woman IPS officer held a degree in Electrical Engineering from CET Bhubaneswar before qualifying the 2015 Civil Service Examination conducted by UPSC.

“Whatever I have achieved today, not just professionally but overall in my life, is because of the constant guidance and support from my parents. Not only they provided me good education, but also they ensured that I got enough exposure in extra-curricular activities like sports, classical dance and martial arts which helped me develop my personality.”

Sagarika believes that every woman has a source of strength within her. “Every woman has to identify her inner strength and thereby channelise it in a constructive manner. Once she learns to do that, then sky is the limit,” the IPS officer added.

4. Chandrani Murmu: The 26-year-old is a member of Lok Sabha from Keonjhar. She contested the 2019 general election as a member of Biju Janata Dal. Currently, she is the youngest Indian Member of Parliament. She completed a degree in Mechanical Engineering from Siksha ‘O’ Anusandhan University, Bhubaneswar and was preparing for competitive examinations when she was approached by the BJD to contest the election.

5.Pratibha Ray: An academician and eminent fiction-writer, Pratibha Ray was the first woman to win the Moortidevi Award in 1991. She won Sarala Award for Yajnaseni in 1990. The Government of India awarded her Padma Shri in the field of Literature and Education in 2007.  She was also conferred with the Jnanpith Award  (2011) and Odisha Living Legend Award (2013) .

An alumnus of Ravenshaw University, Pratibha started her career as a school teacher and continued to teach in Government Colleges in Odisha for around thirty-year. She took voluntary retirement as a Professor of Education from State Government Service and joined as Member, Public Service Commission of Odisha. She has written various novels, travelogues and short stories and has been conferred with various academic awards for her contribution to Odia literature. Apart from her literary career, the septuagenarian has been a part of various social activities and movements to fight social injustice.