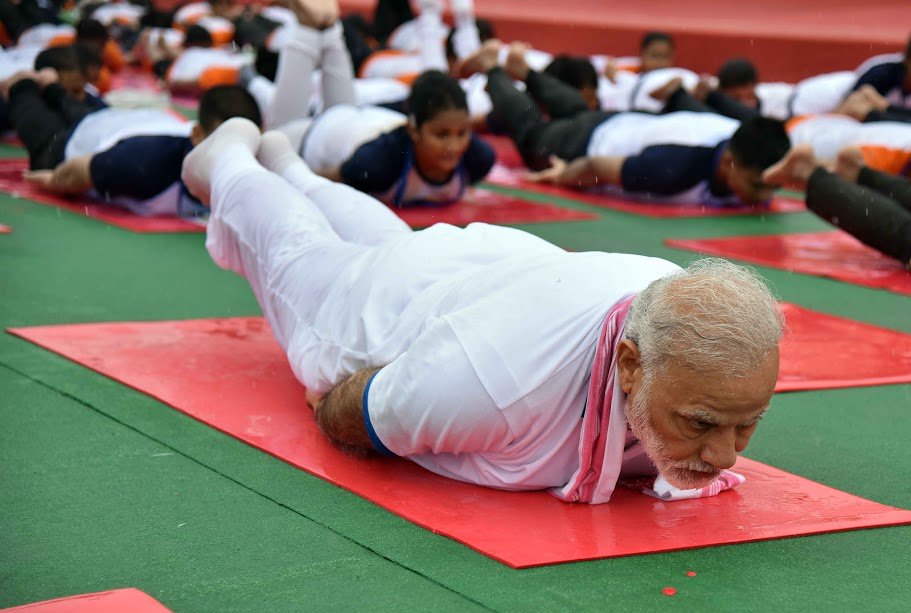 Lucknow: Prime Minister Narendra Modi did yogic exercises amid rains for some 15 minutes here on Wednesday as he underlined the importance of yoga in connecting the global community and creating jobs.

Leading the celebrations of the third edition of the International Yoga Day here at a rain-drenched Ramabai Ambedkar Sthal, Modi said yoga was a path to attain wellness and was akin to a free life insurance.

“There was a time when yoga was confined to sages meditating in the Himalayan caves. But now yoga is becoming a part of people’s daily life not just in India but across the world,” the Prime Minister said in his address to thousands.

The crowd was estimated to be 45,000 strong, slightly less than the 51,000 which was expected, due to heavy rains that lashed Lucknow since morning.

“There are many countries which don’t know our language, are not aware about Indian culture or traditions but they too are practising yoga. Much like it connects the mind with the soul, yoga is playing an important role in connecting the world,” said Modi, dressed in a white track suit.

Modi said since the UN declared June 21 as the International Day for Yoga, awareness about yoga had been rising the world over leading to creation of a new job market.

“In countries across the globe the demand for yoga teachers is rising, creating a new job market. Indians are the most preferred choice,” he said.

He also said efforts were on to standardise yoga practices in India as also the world.

The Prime Minister underlined that yoga in life was as important as salt in food.

“Salt not just makes food tasty but also adds nourishment value to it. It is cheap and is used in very small quantity but none can deny its significance.

“More than fitness, more than being healthy, people now yearn for wellness. And there is no better way to attain wellness than yoga,” said Modi.

After addressing the gathering, which cheered him from time to time, the Prime Minister joined the gathering in the open air venue, amid heavy rains, and practised yoga for more than 15 minutes.

Surrounded by heavy security, Modi walked to the mat reserved for him and waved to the crowd. Many tried to shake hands with him.

The Prime Minister did yogic exercises and ‘pranayam’ as demonstrated by a group of yoga teachers on the stage.

He left after 15 minutes even as Naik, Adityanath and others continued to do yoga.

Modi it set to fly back to New Delhi in an Indian Air Force plane.

“Yoga is an ancient Indian practice and all ancient scriptures including the Vedas have accepted the importance of yoga. Yoga is a way of life and helps to unite people,” Adityanath said.