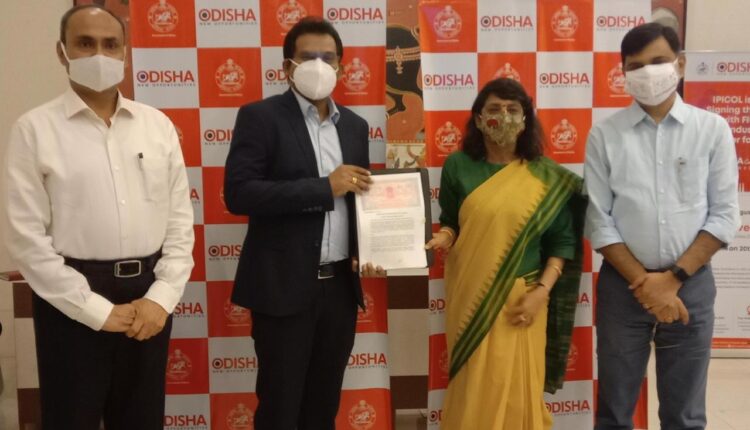 Bhubaneswar: The Government of Odisha has selected the Federation of Indian Chambers of Commerce and Industry (FICCI) as the National Industry Partner for the 3rd Edition of Make in Odisha (MIO), the flagship event of the state government which showcases the state as an industrial power house and a preferred investment destination in the country.

On Tuesday, an MoU was signed in this regard by Nitin B. Jawale, MD IPICOL and Arun Chawla, Deputy Secretary General FICCI in the presence of Naveen Patnaik, Chief Minister, Odisha.

Addressing the MoU signing ceremony, Chief Minister Naveen Patnaik said, Odisha continues to remain as a premier investment destination for the investor community – even after the impact of COVID -19 across the global economy. Even during these trying times, Odisha has undertaken various investment promotion activities and leveraged technology to reach out to the investor community. This is evident by the fact that the state has attracted over Rs. 24, 300 crore worth of new investments since February 2020.

“My government has a vision of making Odisha an investment destination of choice for the global investor community. The successful organization of Make in Odisha Conclaves in 2016 and 2018 have helped us move towards realizing this vision. With the signing of MoU with FICCI today, I am sure that we will take the next leap in terms of industrial growth and development,” the CM said.

Minister for Industries, Energy, MSME and Home (MoS) Govt of Odisha Dibya Sankar Mishra said, after the successful conclusion of the last two MIO Conclaves , the state Government has focused on early grounding of projects. Nearly 60% of the investment intents received are now in various stages of implementation. We have organized 10 phases of ground breaking and inauguration events enabling faster implementation of the industrial projects.

President FICCI, Sangita Reddy mentioned, “I have no doubt that the event would replicate the resounding success of its last edition and attract even more fruitful investments into the State. Let me assure the State Government that FICCI will not leave any stone unturned for the success of the Conclave and associated activities.”