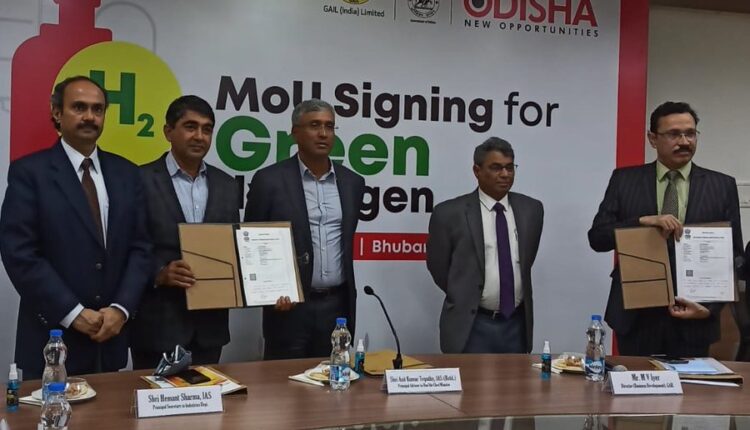 Bhubaneswar: IPICOL and GAIL (India) Limited today signed a memorandum of understanding (MoU) for cooperation in the areas of green Hydrogen, green Ammonia and renewable energy (solar/wind) for the production of eco-friendly fuels in Odisha. As part of the MoU, a feasibility study will be prepared for setting up of the proposed plants. It also emphasizes promoting production of eco-friendly fuels in the State.

Green Hydrogen would help industries reduce aggregate emissions of Green House Gases (GHGs) thereby contributing to the overall objectives of the Government of India’s INDC targets. Odisha, being a power surplus state, is looking to further strengthen its position in power and these upcoming plants will help the State-based heavy industries to supplement their growing power requirements.

Attending the MoU signing ceremony at Bhubaneswar, Asit Tripathy, Principal Secretary to Chief Minister of Odisha said, “The entire world is trying to reduce the carbon emission, but it needs a lot of intent, support and energy to execute the massive change. We are very eager to help the company in terms of suitable land and solid support.”

Principal Secretary, Industries department Hemant Sharma praised the active interest of GAIL to set up the Green Hydrogen plant. He added currently, Odisha has a very large pre-existing market for hydrogen and with this joint effort to produce green hydrogen in bulk, the cost of green hydrogen will get reduced for industrial consumption.

Speaking on the occasion, MV Iyer, Director (Business Development) stated, “We are focused on the development of natural gas infrastructure and clean energy projects in Odisha and the rest of the country. In Odisha, GAIL is laying natural gas pipeline, setting up a CGD project and also setting up a coal gasification plant in JV mode.”

The event was attended by leading steel, aluminium and chemical manufacturers along with the leading industry bodies such as FICCI, ICC, CII and UCCI.

‘Precautionary’ vaccine dose will be same jab administered before: Govt

Lawyers abstain from court in Odisha as 14 staff test…