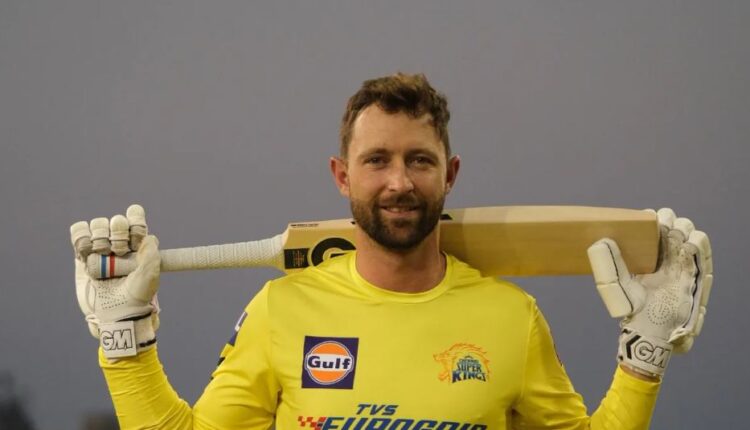 Pune: Charismatic New Zealand batter Devon Conway is making waves in the Indian Premier League (IPL) for Chennai Super Kings and, while the world may know him as a cricketer who migrated from South Africa to New Zealand, little is known about his other Chennai connect that happened nearly five years back.

The prolific run-getter’s association with the Mahendra Singh Dhoni-led side might have started after he was picked in the IPL mega auction this year, but many years back it was a former first-division cricketer with India Cements, Sriram Krishnamurthy — now a coach in New Zealand — who spotted him.

Sriram was then the batting coach of Wellington Firebirds when Conway moved from South Africa to Wellington in 2017 in search of a better growth in the sport.

“In a lot of sense, I know what it feels like to move to a certain place, especially New Zealand,” Sriram told CSK website. “The nervousness that you have when you move from one country to another, it takes time to settle in,” added the former cricketer, who himself moved from Chennai to the UK and then to Australia before eventually settling down in New Zealand in 2015, coaching several sides there.

“Moving from South Africa to New Zealand for good with the unknown of whether he (Conway) would realise his dream of becoming an International cricketer — it was a big decision. I had to give him as much information as possible,” said Sriram.

“Devon was different. He outlined his desire to do well for his club team first. There was a real desire from Devon’s side to say that ‘look I will do my hard work and along the way if I’m rewarded, that’s great’. That stood out for me straightaway. He was willing to put in that work without doubting himself or thinking too far ahead of what it could lead him to. This tells me that he’s a very strong personality.”

Interestingly, Sriram and Conway didn’t get to work with each other apart from a few indoor sessions in the initial few months as the former was away on New Zealand A tours. By the time they worked closely, in 2019 with Wellington Firebirds, Conway was already establishing himself in the New Zealand cricket circuit.

Conway made a dream Test debut, scoring a double ton at Lord’s against England early last year. He now averages more than 50 in each of the three formats in his brief international career.

Sriram says he was surprised when he came to know that Conway had been picked by CSK at the mega auction.

“I was surprised he got picked by Chennai Super Kings. I knew he was going to be picked, that was definitely a no brainer for the sort of player he turned out to be in International cricket over the last 12 months. I’ve had scouts from other franchises ask me about Devon. So I knew he would get picked… I was pleasantly surprised that he was picked by CSK!

“I’m happy that Devon is a part of CSK. I also know he’ll thrive in a team like CSK because his game is such that when there is calm around him, he possibly transcends the normal. He plays cricket at another level.”

Sriram said he was looking forward to watching Conway in the IPL next year, especially at Chepauk, the hub of Chennai cricket.

“Who knows with Covid and everything relenting, maybe next year, when IPL games are happening all over the country, how good would it be for me to be in Chennai and support him at Chepauk. And also to have the opportunity to take him to my house and show him around Chennai as well if possible. It would be a cool story.”