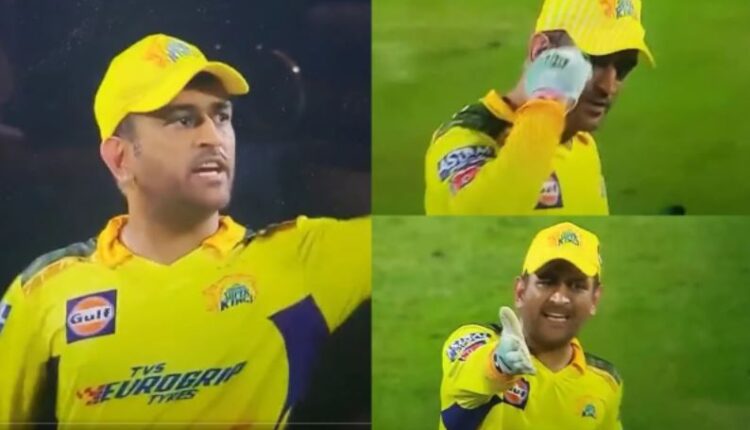 Pune: Chennai Super Kings skipper Mahendra Singh Dhoni was seen losing his cool on young pacer Mukesh Choudhary, who while bowling the last over in Sunrisers Hyderabad’s chase, sent down a wide ball.

With hard-hitter Nicholas Pooran going great guns — the West Indian ended up smashing an unbeaten 64 off just 33 deliveries at a strike rate of nearly 194 — every ball was crucial, but Choudhary angled one towards the leg side of the batter, which unfortunately was called a wide by the umpire.

Dhoni, who was leading CSK for the first time this season after Ravindra Jadeja stepped down following a string of unimpressive performances by the franchise, looked agitated as he supposedly gave instructions to Choudhary to bowl a proper line.

Apparently, Dhoni wanted the pacer to bowl wide of the off-stump as the skipper had fortified the field placement on the off side.

However, Choudhary, who emerged the most successful CSK bowler on the day, returning figures of 4-0-46-4 and halting Sunrisers’ charge of a 203-run winning target, said post-match that the skipper didn’t tell him “anything special” in the final over.

“At the end, MS Dhoni didn’t tell me anything special about that last over. He just told me to bowl stump to stump, avoid no balls and not try anything fancy,” said Choudhary.

Dhoni later compliment Choudhary for his bowling performance, saying, “It’s easy for us batsmen to criticise them (young bowlers) at times but there is a lot of pressure on them. Slowly once they get mature, that’s when they start soaking that pressure and want to be under the pump.

“It’s good to see Mukesh (Choudhary) doing that for us. He took a few games, now he’s bowling well. You can get away with a lot of things in first-class cricket and age-group cricket. But over here you can’t really get away with too many things. You need to be consistent, need to know what you’re doing and accept the shortcomings. Unless you accept the shortcoming, the process of becoming strong in the areas you’re weak takes more time. So acceptance and honesty is the key,” added Dhoni.

Mumbai airport to remain shut for 6 hrs on May 10