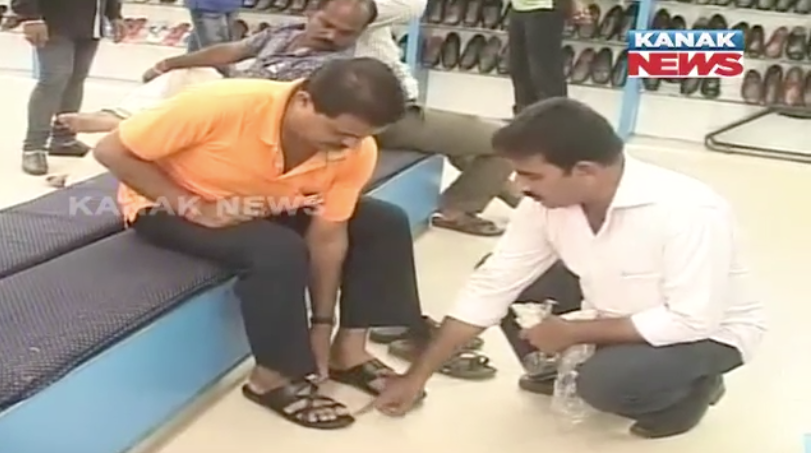 Cuttack: While the leaders and workers in the ruling BJD are enjoying luxury life, party’s former corporator Abdul Malik is now striving for livelihood. He turned a salesman in a footwear shop here after five years of tenure.

This was an irony of fate that an active politician lost his business, happiness and he struggled to manage his family in poverty.

Abdul had entered the politics after being inspired by Biju Patnaik and Naveen Patnaik’s ideologies. He rose to fame serving people as the corporator of ward number 16 in Cuttack Municipal Corporation (CMC). However, he lost everything after his tenure.

Former CMC corporator Abdul, son of Abdul Zalil, had ventured into hotel and taxi business after his Madrassa education. He joined the BJD in 2009. Even the heavyweight BJD leaders including Surjya Patro, Raghu Mohanty and Prafulla Ghadei had recommended his name for getting ticket from BJD chief Naveen Patnaik to contest in the CMC election. He defeated his rival Muhammad Famid of Congress in 244 votes to win the polls. Recognising his performance in the party for people, he had got opportunity to become the chairman of urban minority cell. However, he had rejected the offer.

Later, his hotel was closed. He sold his taxi to meet his necessities in politics. His wife opted for tuition to manage the family. After five years, he could not get chance to fight the next poll as the ward number 16 (now ward number 19) was reserved for woman candidate under reservation rule. He preferred to work for the party.

As he had no other source of income, it was tough time for him to manage the family. He wanted to do a job for his livelihood, but due to his active participation in politics nobody offered him work. Now, he is engaged as the salesman at a footwear shop located at Bajrakabati.

He has accepted the profession since past one and half year for his family.

“I was serving people as the Corporator and even today I am serving people. I am doing foot service and I should not feel ashamed of this profession because I am not indulged in theft, I am doing labour,” Abdul said.

However, there is no importance left for him in the party, he added.

His wife faces lots of challenges while managing the family with minimal income.

“Earlier, it was okay. Now lots of problems and issues are there. Now my husband is working at Sreeleathers,” his wife said.

Like Abdul several instances are there who are now struggling in their life after holding political positions. They were thrown out like a piece of paper after they failed to appease the party’s high command.

Earlier, a story about Athgarh NAC’s former councilor, who went to Gujarat in search of work, was reported in ‘OST’.

While many leaders in the Naveen Patnaik government are enjoying power during 17 years of BJD regime, such honest leaders in the party are spending their days in poverty.