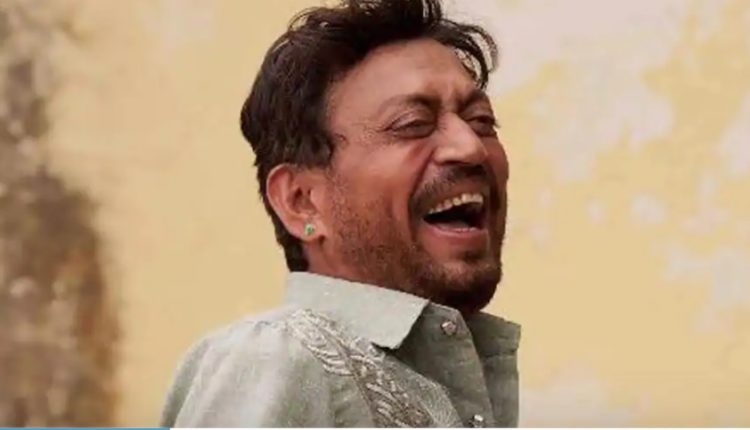 Bhubaneswar: A man of few words and an actor of thousands of silent expressions with his deep eyes, Irrfan Khan is no more. Considered as one of the most versatile and revered actors of Bollywood, Irrfan breathed his last after fighting a two-year battle with neuroendocrine tumour.

The 54-year-old artiste, who was diagnosed with a neuroendocrine tumor in 2018, passed away at Kokilaben Dhirubhai Ambani Hospital in Mumbai today. The entire countrymen, including the Bollywood fraternity were shocked to hear the untimely demise of the actor. People from all walks of life mourned his death and termed his death as an irreparable loss.

Born in Rajasthan on January 7,1967, the actor is known for his work predominantly in Hindi cinema, in addition to British and American films.  In a career spanning over 30 years and featuring in more than 50 domestic films, Irrfan had received numerous awards, including a National Film Award and Filmfare Awards in four categories. In 2011, he was awarded Padma Shri, India’s fourth highest civilian honour.

An alumnus of National School of Drama (NSD), New Delhi, Irrfan made his debut in Bollywood with the Academy Award-nominated Salaam Bombay in  1988. Followed by a series of roles in films that failed to propel his career forward, he received critical acclaim for playing negative roles in the drama films Haasil (2003) and Maqbool (2004).  He won the Filmfare Award as Best Villain for Haasil.

The successful drama Life in a… Metro (2007) marked a turning point in Irrfan’s career, earning him praise and several awards including the Filmfare Award for Best Supporting Actor. He rose to prominence with his portrayal of Paan Singh Tomar in the acclaimed biographical sports drama Paan Singh Tomar (2011), which garnered him the National Film Award for Best Actor and a Filmfare Critics Award for Best Actor. His performance in the BAFTA Award-nominated romance The Lunchbox (2013) earned him universal acclaim by the critics and audiences. Irrfan went on to feature in the commercially and critically successful films Haider (2014), Gunday (2014), Piku (2015) and Talvar (2015). His highest-grossing Hindi release came with the critically acclaimed comedy-drama Hindi Medium (2017), which became a sleeper hit in India and China, which ranks among highest-grossing Indian films of all time and earned him praise for his performance, winning several awards including the Filmfare Award for Best Actor.

Here are some of his works:

Odisha Plus II Exam to be held after lockdown