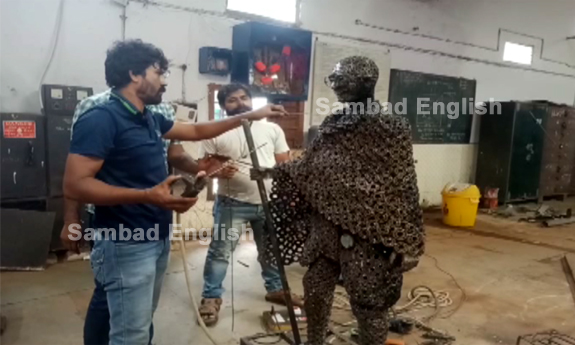 Berhampur: Some students of the government-run industrial training institute (ITI) in Berhampur City of Ganjam have created a statue of Mahatma Gandhi with waste materials, a source said today.

“It was an effort to prepare the ‘Best out of Waste’. The ITI students have previously created a number of innovative and attractive things from materials people usually do not use anymore. Making the statue of Mahatma Gandhi was started about 15 days ago for Gandhi Jayanti falling on October 2, which has been created entirely by making use of iron scraps,” a senior instructor of the ITI expressed.

Initially, a sketch of Gandhiji was prepared for the purpose. Students then constructed the 6 feet-high statue by making use of more than 1,600 ball-bearings and few other metal waste materials. It weighs around 110 kilograms. They were guided by instructors of the institute, the teacher added.