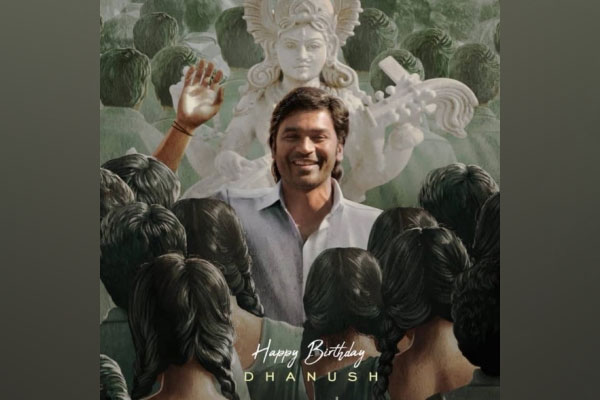 Chennai: From director Selvaraghavan, who happens to be the elder brother of actor Dhanush to Swedish actress Ellie Avvram, who plays the female lead in his upcoming film, ‘Naane Varuven’, several celebrities cutting across film industries joined scores of fans in greeting actor Dhanush on his 39th birthday.

Selvaraghavan, who was among the first to post his birthday wish to his brother, tweeted, “A special birthday for a special person. Happy birthday in advance my dear brother Dhanush K Raja.”

Actress Ellie, who plays the female lead opposite Dhanush in director Selvaraghavan’s upcoming film, ‘Naane Varuven’, tweeted, “Happy birthday Dhanush K Raja! May you always keep shining and inspire us as the wonderful actor and human being that you are! God bless you Superstar.”

Actress Raashi Khanna, who plays one of the female leads in Dhanush’s upcoming ‘Thiruchitrambalam’, too wished him on Twitter. She wrote, “Happy birthday to one of the most passionate and finest actors I have worked with, Dhanush K Raja! Wish you all things wonderful! Upwards and onwards my friend!”

Actor Vaibhav said, “Many many happy returns of the day my dear D sir,” while actress Indhuja tweeted, “Happy birthday Dhanush K Raja sir. One of the most capable and captivating actors who can turn the impossibles into possibles! May you continue to inspire us and make us more prouder. Glad to have worked with you. Have a blessed birthday sir.”

Music director Sean Roldan wrote, “Dearest Dhanush K Raja sir. No matter how much success you get, what heights you reach, you have always retained your integrity as an artiste and a human being. There’s one word that doesn’t suit you – impossible. Have a great year my friend and brother.”

Music director Santhosh Narayanan said, “Happy birthday dearest baby darling Dhanush K Raja sir! You are such a special person and an incredible talent. This year is going to be so epic for you !”

Actress Mirnaa too wished Dhanush on his birthday on Twitter.

She wrote, “Happiest birthday wishes D saar. You’re a ray of hope for me and millions. Keep inspiring! Here’s to a yet another blockbuster year ahead.”

Actress Aishwarya Rajesh, who is in Europe on a holiday, wrote, “Happy, happy birthday Dhanush K Raja. Wishing you many more blockbuster years ahead.”