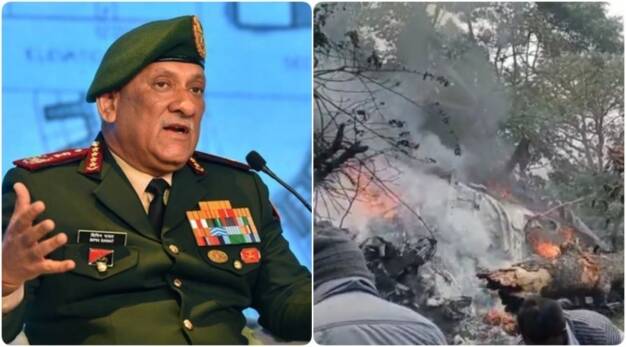 Bhubaneswar: Bipin Laxman Singh Rawat, India’s first Chief of Defence Staff (CDS), today succumbed to injuries when an Indian Air Force (IAF) chopper carrying him and his wife along with 12 others crashed in Tamil Nadu. He was 63.

General Rawat was on his way to Defence Staff College in Wellington to deliver a lecture, when the ill-fated chopper crashed at Coonoor in Nilgiris district at around 12.20 pm.

“Gen Bipin Rawat, Chief of Defence Staff (CDS) was on a visit to Defence Services Staff College, Wellington (Nilgiri Hills) to address the faculty and student officers of the Staff Course today. Around noon today, an IAF Mi 17 V5 helicopter with a crew of 4 members carrying the CDS and 9 other passengers met with a tragic accident near Coonoor, TN,” the Indian Air Force tweeted.

“With deep regret, it has now been ascertained that Gen Bipin Rawat, Mrs Madhulika Rawat and 11 other persons on board have died in the unfortunate accident. Gp Capt Varun Singh SC, Directing Staff at DSSC with injuries is currently under treatment at Military Hospital, Wellington,” the IAF added.

Here’s a sneak peek into his illustrious career:

The four-star General of Indian Army had taken over the coveted post on December 30, 2019, days after the Government announced creation of the CDS post.

The Government had earlier amended the Army rules to extend the age of superannuation from 62 years to 65 years, paving way for the appointment. CDS is an one-point advisor to the Government on matters related to the military and functions with the main aim of integrating the three services– Army, Navy and the Air Force.

Born on March 16, 1958, General Rawat had taken over the reins of the Indian Army from General Dalbir Singh Suhag on December 17, 2016, as the 27th Chief of Army Staff (COAS). An alumnus of the National Defence Academy (NDA) and the Indian Military Academy (IMA), Rawat was commissioned into in the Fifth Battalion of the Eleven Gorkha Rifles in December, 1978 .

General Rawat also served in some of the most difficult terrains of India, including the northern and eastern commands, where he was instrumental in several counterinsurgency operations.

He was instrumental in reducing militancy in the northeast, with one of the highlights of his career being the 2015 cross-border operation into Myanmar, in which the Indian Army successfully responded to an ambush by NSCN-K militants. He was also part of the planning for 2016 surgical strikes, in which the Indian Army went across the Line of Control (LoC) into Pakistan-occupied Kashmir.